Three years ago today, Rupert Murdoch bought MySpace and its parent company Intermix for $580 million. That turned out to be money well spent. The last time we ran the numbers, we figured that MySpace alone is worth between $3 billion and $20 billion, depending on how much you value each user. Fox Interactive Media (which is mostly MySpace) accounted for about $850 million in revenues last fiscal year (which ended in June), and is projected to hit $1 billion next year.

It was supposed to hit $1 billion this year, but never mind. Unlike other social networks, MySpace is actually making a profit. The company now employs 1,600 people worldwide, compared to 150 in October, 2005—more than a tenfold increase.

The social network has grown as well. MySpace now has 73 million unique visitors a month in the U.S., according to comScore, compared to 24 million three years ago. (Facebook has 41 million). That means MySpace reaches about 40 percent of the online population, compared to 14 percent three years ago. Those visitors, on average, spend 263 minutes a month each on the site, versus 83 minutes in 2005.

MySpace has definitely evolved since 2005. Just this year it has made major strides in opening up its platform to developers, launching MySpace Music, and pushing new forms of social advertising.

The question is whether rival Facebook can catch up to MySpace in the U.S. (it has already surpassed it worldwide), or whether the two will co-exist and diverge, with MySpace being more music- and media-oreinted and Facebook continuing on its path towards becoming the platform for social software. Of course, MySpace would also like to play that role.

Three years from now, which one will be worth more? And will Rupert Murdoch still be smiling? 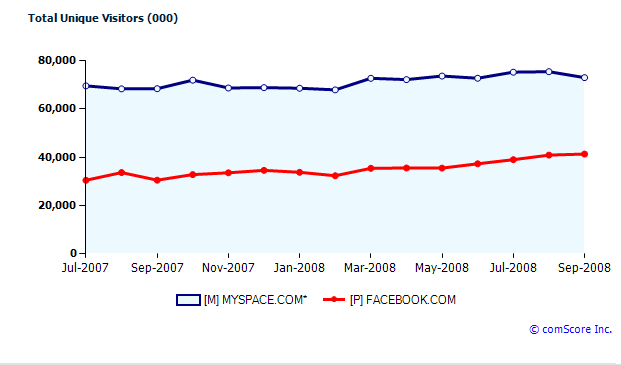