Although the world market for e-learning is estimated to top $52 billion in 2010 (in 2007, revenues exceeded the $17-billion mark in the US alone), it’s still quite hard to find good resources for education and training in the Web 2.0 space. It seems that so far, the e-learning industry as a whole focuses on applications for enterprises and educational institutions.

But now there is a new player in town: iKnow!, which calls itself an intelligent social learning platform, initially offers a number of English vocabulary extension, SAT preparation and Japanese language courses, but more content will be added in the near future. Tokyo-based Cerego actually started the beta version (in Japanese only) in October 2007 with English courses for Japanese people, now counting more than 280,000 users in Nippon alone. iKnow saw 350,000 unique visitors in September 2008, up 40% from just two months prior in July 2008.

The platform is built upon a learning engine that is supposed to free users from sorting study materials, devising study plans, measuring learning progress and self-managing knowledge on a long-term basis. Users can set personal learning goals and let the system do the heavy lifting. Cerego holds a number of patents on its learning algorithms, which are based on years of research in cognitive science and neuroscience. The performance of its users is continously analyzed, enabling iKnow to promptly adjust learning processes on an individual basis. 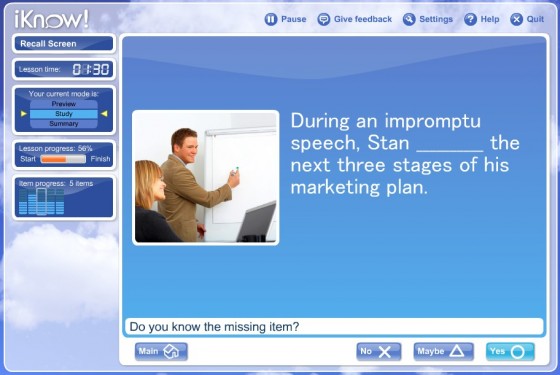 iKnow disaggregates information into bite-size pieces (called items), making it easier for users to store, absorb and manage it as personal knowledge on the site. For instance, the “Erudite Vocabulary 1” English course features a total of 89 items (i.e. verbs like “immure”, “bruit” or “adumbrate”) that are embedded in 134 different example sentences. The system recommends (and automatically schedules) 28 days for this course but users get to decide themselves whether they want to absorb the study units through multiple short bursts or long study sessions.

Items are studied mainly through multiple choice questions, dictations, brain training games, quizzes etc. In order to attenuate memory decay effects, difficult items have to be reviewed in individually timed intervals and in a different manner (i.e. by letting users spell certain words instead of asking multiple choice questions). The site allows for users to stop and resume studying anytime and also keeps track of how many items they learnt in the process. After finishing a course, all content studied can be stored for later reference and accessed again anytime. 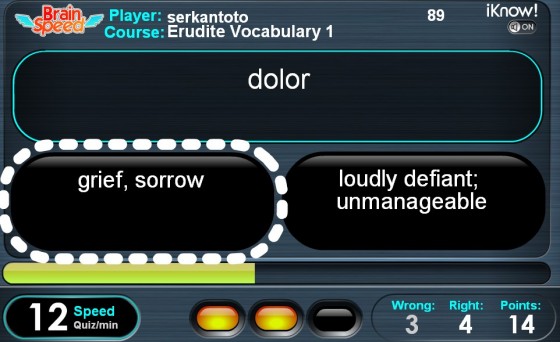 Acceleration of knowledge acquisition through creating and sharing content

The free site’s key element is the social network functionality, combined with extensive video, image, audio and gaming content. iKnow users are supposed to not only study on the site but also to accelerate the learning process by creating content and sharing this content with others. In this example, a user uploaded a YouTube clip of the first presidential debate between Barack Obama and John McCain and extracted key items and sentences himself. Here Steve Jobs teaches Japanese people English via a similarly processed video. Other users can now systematically learn these items in a structured lesson the system semi-automatically creates based on the user-generated content.

The idea of connecting people is especially powerful in the realm of learning languages and in fact, it’s relatively easy to make international friends on the platform. But in contrast to sites like Babbel, for example, iKnow’s learning algorithms are not limited to languages: Soon users are supposed to learn any type of fact-based information on the site. Think pulling the main bits of information from a Wikipedia article as study units, mixing them with text-based and multimedia content from other websites and sharing the lessons generated by iKnow with other users.

iKnow’s approach of combining a hypermodular, personalized learning methodology with collaborative human power spurred by a social network built on top of it, has the potential to become a blueprint for future online education concepts. The amount of things you can learn and do on iKnow is simply overwhelming.

Online learning is becoming an increasingly crowded field, with sites like LiveMocha, PrepMe or TechCrunch50 runner-up Grockit cropping up by the week. Compared with iKnow, however, most existing e-learning sites set fundamentally different priorities by focusing on non-scientific approaches to learning, paid services, enterprise solutions or neglecting social networking aspects.

And iKnow is likely to expand even more: Cerego opened up their learning API for third party developers from all over the world just today.

It seems that the company is not only gaining momentum with users and now potentially developers, but according to industry insiders, Cerego is close to closing a significant round of financing led by Japanese top-tier investors. We will stay tuned. 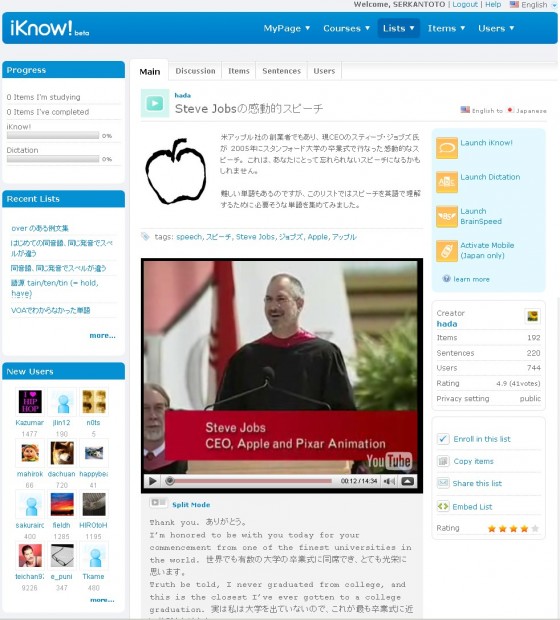