Death is an unfortunate consequence of life, at least until science can prove otherwise. And while most of us would rather just avoid the subject entirely, the thought of having a sappy, cheesy funeral weighs heavy on some people. MyWonderfulLife, a Minnesota-based startup that launched earlier this month, is going to help you make sure that doesn’t happen. 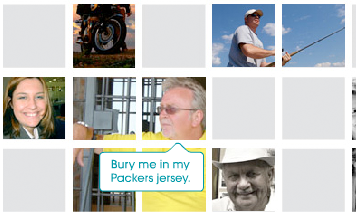 There are also options for detailing instructions that should be carried like outside of the funeral (such as where to find the will, or what you’d like your headstone to look like). You can write letters to loved ones to be distributed after your death. And if you really want to write your own obituary, you can do that too.

After creating a profile you select up to six ‘Angels’, who are sent an Email with a link they’re told to click on upon your death (the Email is resent every 6 months so that they don’t lose it). Clicking this link takes the Angels to your MyWonderfulLife page, where they’re given the appropriate instructions. While many of the details listed are probably covered in your will, the site says that wills usually aren’t read until after the funeral, so some of your requests might not be honored unless you have another source of instructions.

As with all other “online will” sites, there’s a possibility that MyWonderfulLife will kick the bucket before you do, making this all a moot point. I wouldn’t trust any vital information to the site quite yet, but if you just want to leave your favorite playlist, it’s worth the five minutes it takes to fill out a profile.