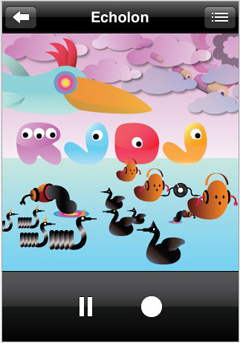 RjDj, a new iPhone application that was released earlier this week, is one of the coolest things I’ve seen released on the still fledgling platform. Download it now, if only to try it for a few minutes. You can download the full version for $2.99 here, or you can try out the free version (which only has one ‘scene’).

The application is difficult to describe and on paper it sounds sort of silly (see the video below for a convincing demonstration). Using the iPhone’s built in microphone, the application listens for ambient noise which it then modifies and infuses into an automatically generated dynamic soundtrack. Each of the application’s six different “scenes” has a different feel to it, with options like a trance-like beat that might fit in at a club and a track that is based entirely on percussion. Each track also treats the incoming audio differently – some tracks loop the input, while others distort it.

For some tracks the end result is incredibly trippy, to the point that I don’t think I’d be able to run the app for more than a few minutes at a time. Others, like “Gridwalker” are more serene, and would be a relaxing accompaniment for a morning commute. And some of the tracks lend themselves to creativity – the application allows users to record their dynamic soundtracks, so you can save any cool effects you come up with.

There are some high quality and useful applications available on Apple’s App Store, but most innovation has been restricted to making use of the phone’s built-in accelerometer (and that loses its ‘wow’ factor after a while). RjDj is venturing into exciting new territory, where music is no longer a purely passive form of media – I won’t be surprised if we see an onslaught of similar (and hopefully improved) applications in the near future.