Eyealike, the startup that lets you use photo recognition to help find your ideal mate, is expanding to apply its image processing technology to a new market: advertising. The company says that the new system will allow businesses to place highly targeted advertising alongside photographs that appear on their site (which have long been difficult to monetize).

For now the image recognition is restricted to identifying physical traits of the people in photographs, with categories including age, gender, hair color, and skin color. In the demo I saw, the results were impressive: photographs with babies in them were paired with products for infants and toddlers, and makeup ads were shown near photos with women in them. 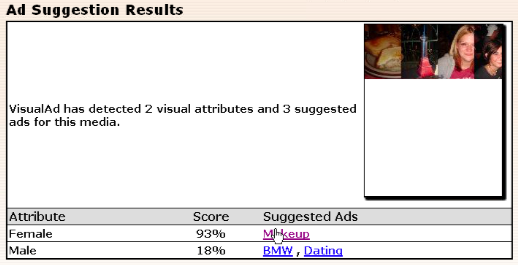 The company is also in early stages of identifying company logos in photographs (which could be paired with matching products), and eventually hopes to include support for more objects, like vehicle recognition and applications for travel.

Eyealike isn’t meant as a consumer product. Instead, it’s being licensed at an enterprise level, with a customizable backend that Eyealike will tailor for each customer’s needs. Provided the system works well, Eyealike shouldn’t have any trouble finding customers – sites like MySpace with billions of photos would love to more effectively monetize them.

The problem that Eyealike is trying to solve isn’t a new one, as numerous other startups have tried to implement their own versions of image recognition. Unfortunately, lackluster accuracy has long hampered this kind of technology. Eyealike claims that its algorithms work 90% of the time – an impressive figure that would undoubtedly lead to higher advertising revenues. But because the technology doesn’t have a consumer front-end, I was unable to try it out for myself. Eyealike says that it is in talks to implement its system in a large social network, so we may get to try it for ourselves soon enough.