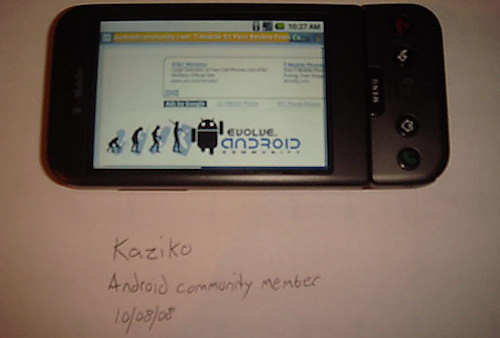 Not tethered by the likes of embargoes and bravely challenging the heavy hand of their employer, a T-Mobile employee (Update: They work for a T-Mobile Master Dealer, not corporate) who doubles as a member of the AndroidCommunity forums has posted a user review of the T-Mobile G1.

Fortunately, the giddiness of being one of the first in the world with the G1 didn’t keep “kaziko” from being objective in his review. On the upside, he mentioned that the phone starts up quickly (relative to other HTC handsets), is surprisingly lightweight, has a solid keyboard, and that the call quality and speakerphone volume were satisfactory. On the downside, it “has a big memory leak somewhere” which slows things down until the device is reset, even after which point it “doesn’t run as smoothly as you would think”. He also notes the lack of a virtual keyboard or accessible file system, difficulties getting .mpg and .wmv files to play, and that the handset gets “extremely hot” while charging. (Update: Kaziko has since revised his review – see comments)

To help pacify the barrage of questions that began after folks realized they’d found someone with a G1, Kaziko has also been maintaining a Q&A.

With just under two weeks to go before the first round of pre-orders are fulfilled, expect the reviews to begin pouring in over the next few days.