SearchMe, a new Sequoia-backed search engine that launched in March, isn’t happy with some of the screen shots that have been seen around the Internet promoting Yahoo’s new BOSS (“Build Your Own Search Service”) product.

In particular, this shot, which was included in a CNET article, shows what appears to be SearchMe’s search interface (itself borrowed from Apple’s iTunes album browser) with the logo cut off (compare it to this). CNET describes the screen shot as “One idea Yahoo showed for BOSS: show miniature versions of the Web pages returned by search results.”

To be fair to Yahoo, the screen shot was included in a press briefing document (the slide, which I also received, is shown below) and Yahoo was using it only as an example to show how the service worked. Yahoo has also said that they reached out to SearchMe to discuss a partnership, as they’ve done with scores of other companies. In the briefing, Yahoo didn’t specifically call attention to the slide, and it was made clear to journalists (or at least me) that the product wasn’t made for front end design, just as a search web service. 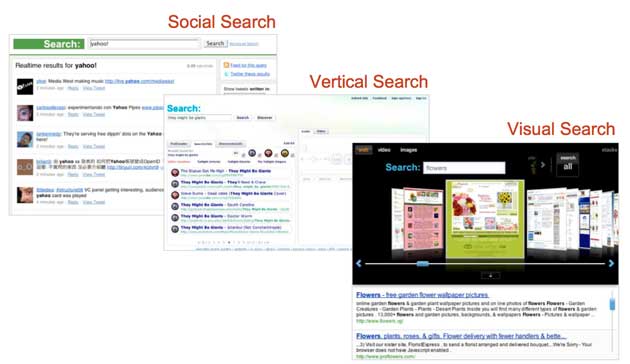 Yahoo probably should have left the SearchMe logo on the screen shot, but given how many other things there are to criticize Yahoo for these days, I’m inclined to give it a pass.