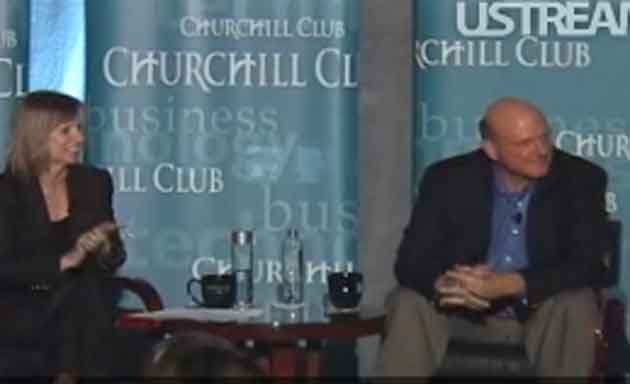 The early part of the discussion focused on Microsoft’s views on web based software offerings from companies like Google and Salesforce. Ballmer says apps don’t really belong solely on the client or in the cloud, but rather a “software plus services” approach that distributes processing and storage across the cloud and the local machine or device. This hybrid approach, known as Windows Live Wave 3, is being rolled out now and major announcements will be made at the upcoming Microsoft PDC conference in Los Angeles. Windows 7 will also be available for the first time at the PDC.

Ballmer also talked about Microsoft’s only money-losing business unit – online. He admits the company is a distant third in search, but claims second in “advertising software.” He says he remains committed to finding a way to win in search, and in fact says that Microsoft is the only company in a position today to compete with Google in search. He reiterated that they would continue to commit 5-10% of total operating cash flow for the foreseeable future to try to gain search share.

When Ballmer talks about search, he’s really talking about advertising, since such a high percentage of online advertising flows through the search engine. He also stressed that Microsoft is the only company that can compete with Google as the advertising market continues its digitization.

“We need to fundamentally redefine the search experience and the search business model,” he said early on.

Ballmer and Winblad also discussed the mobile market. Ballmer is focused on the smartphone market, where Microsoft software is a major player. 125 million smart phones will be sold this year, he said, and that will grow to a billion in five years. He says proprietary hardware/software stacks (iPhone) will have trouble competing with the more open approaches, such as Microsoft, Android, Symbian, etc. He ads a caveat, however: users won’t trade off usability just to have different hardware choices. The operating systems must work seamlessly across different hardware configurations.

“The smartphone market today is a lot like the PC market in 1983,” he said.

Winblad finished the interview by asking Ballmer how hard he’s found it to steer Microsoft without the recently retired Bill Gates. Ballmer was diplomatic in his response. The company is very diverse in its goals and revenue streams, he says, and so the leadership team as a group has to lead the company.

One of Microsoft’s biggest challenges is to focus on what’s really important for the company, he said. The urgent drowns out the important, he added, and they have to focus on long term growth strategies. “The decisions on what to invest in are the most important.”

Ballmer also let off a few zingers in the Q&A session.