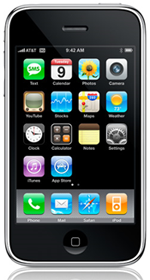 I came across an interesting app in the App Store today that’s worth a look. The app is called RulerPhone and its premise is simple: it will let you take a picture with your iPhone and allow you to measure the distances and dimensions between objects in that picture.

Here’s the deal: you can download RulerPhone for $2.99 in the App Store if you want to measure distances of up to 12 feet or you can pick up RulerPhone Lite for free if you don’t need distances longer than 1.5 feet.

Once you start RulerPhone up, it explains how to use the app. In order to start measuring, you need to place an object about the size of a credit card in the picture you’re about to take in order to derive accurate measurements between the objects in the image. After that, you snap the picture and move to the next screen, which asks you to align a blue card that’s displayed so it lines up perfectly with the credit card in the picture. As soon as the two cards are aligned, you click “Measure” and a ruler is displayed, which you can move around and extend to measure the distance between objects in the picture or their length. The actual measurements are displayed above the image. 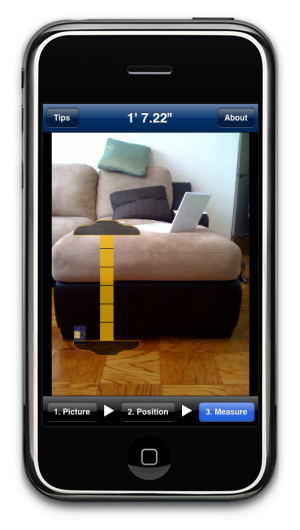 As long as you use a credit card and align the blue card over it perfectly, you shouldn’t have too much trouble measuring accurately with RulerPhone. That said, the measurements are more accurate the closer the credit card is to the center of the image and if you’re looking to make three-dimensional measurements, you’re out of luck — it only supports two-dimensions.

I used RulerPhone for about 20 minutes, measuring things all over the house to see how well it performed. Generally speaking, it did well and came within a few centimeters as long as I followed the instructions perfectly. When I didn’t, RulerPhone would be off by as much as three feet in some cases and proved useless when I wanted to measure the dimensions of less linear objects like a chair.

So why only 20 minutes? Once that time elapsed, so did the novelty. RulerPhone is neat to use for a while, but once you’ve measured almost everything in the room with varying success, it quickly becomes another app in your list that you probably won’t use often.

RulerPhone is an interesting idea with some utility, but I just don’t see any reason to spend $2.99 on this app. Try out the free version instead. 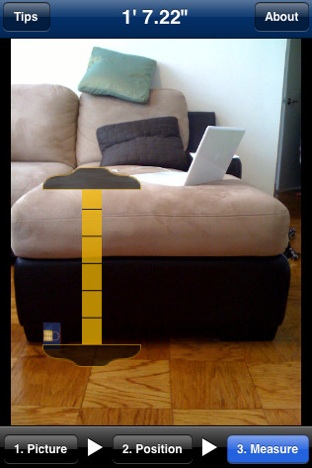