Because of the abundance of photo hosting sites available on the web, it can be hard to track down every photo from an event you’ve attended. Oftentimes they’re scattered across multiple user accounts, under generic album titles like “Party”, making them hard to find and virtually useless for future reference.

LifeSnapz, a photo sharing site that launched at TechCrunch50’s DemoPit, is looking to give users a simple way to manage photos from multiple sources at a given event. To use the site, users first invite their friends to join their groups, where they can post their photo albums under discrete Events (for example, they could create multiple photo albums under the heading “School Graduation).

Collaborative photo albums are nothing new – many popular photo services allow multiple users to upload to the same album. But CEO Brian Hand says that LifeSnapz takes a different approach, by allowing users to group photos through time and space (namely, they are arranged by date and location data, when available). This information is used to compile an interactive timeline, which serves as a fun and intuitive way to browse through past photos (especially when compared to the thumbnail views offered by most photo services). 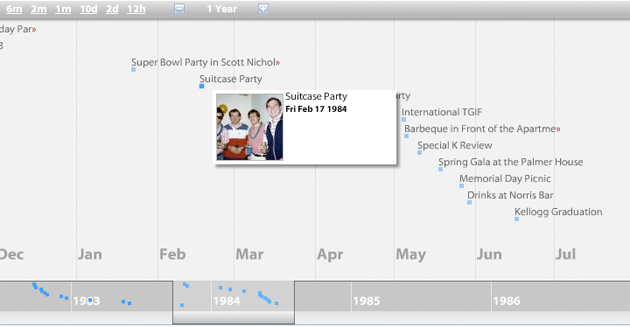 Each event also includes a profile page, which allows users to write further details and comment on the event as a whole. This makes the site appealing not just as a hosting service for current events, but as a place for old friends and acquaintances to reconnect over photos from years past (in an example I saw, graduates from the class of ’84 used the site to share photos from their school days in preparation for an upcoming reunion).

LifeSnapz has some good ideas, but it may have a hard time differentiating itself at this point – while the timeline is impressive, most of these features can be found elsewhere. The site feels a bit too complicated to appeal to the “technology-averse” crowd that is looking for a very basic photo service, but it doesn’t yet include enough features to draw away users of more established services like Flickr and Photobucket.