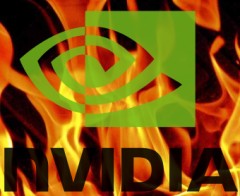 NVIDIA’s “abnormal” number of GPU failures have been the subject of much discussion and speculation during the last couple months. The culprit seems to have been the high-lead solder, which everybody rightly assumed NVIDIA would abandon — after all, it’s cost the company hundreds of millions in direct costs and probably far more in lost sales, lost brand credibility and so on. So why is the next generation of NVIDIA chips using the same problematic part?

There’s really only one explanation for this: they couldn’t get its replacement ready in time. AMD/ATI has been using eutectic solder for some time and NVIDIA attempted to switch over to it as well in July, but clearly it didn’t stick, so to speak. Is the transition taking longer than they thought? Are the problems deeper than they thought? Whatever the case, a company wouldn’t use a material known (or at least strongly suspected) to be failure-prone in such a high-profile product as the new line of GeForces unless forced to.

Ah, well. One more reason for me to switch back to a Radeon!