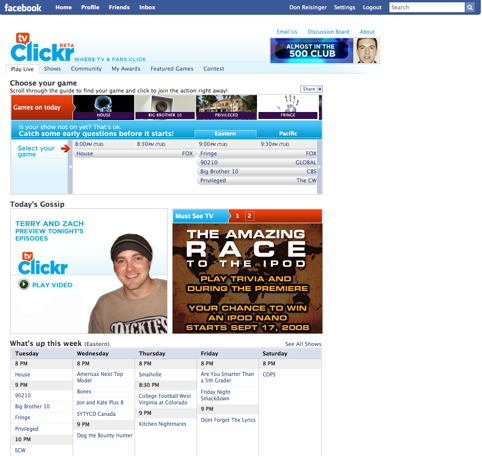 LiveHive Systems on Tuesday announced a major update to its Facebook app, tvClickr, which lets users interact with each other on Facebook as they watch a program live on television.

tvClickr’s premise is relatively simple: A group of the app’s users get online just as their favorite show starts. During the show, they’ll be able to converse about what’s going on, make predictions about what will happen next, answer trivia questions about the show, and engage in opinion polls in real-time. Unlike many apps, it’s not tied to a user’s friends though, so everyone using the app during the episode will be able to get in on the action together. The more you play, the higher your show IQ goes up, which eventually leads to prizes for those that perform the best for each show.

So far, tvClickr supports about 30 primetime shows, including House and Dog the Bounty Hunter, but the company promised that more shows will be coming soon. In order to make the polls and questions relevant, the company has a command center that’s populated by people who update the service as something new happens during the shows.

In an attempt to turn a profit with the app, tvClickr features context-sensitive ads, which change based on what’s going on in the show. For example, if you’re watching Dog the Bounty Hunter and Dog starts using an iPod, the ads will be changed to something promoting iPods or Apple itself.

If you want to try tvClickr out tonight, it will offer its service for House, 90210, Fringe, Big Brother 10, Privileged, and ECW as the shows air. 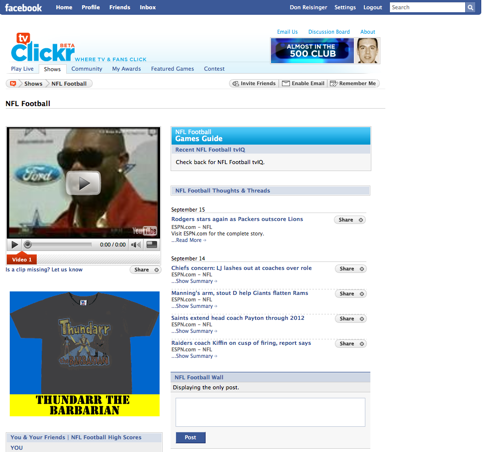