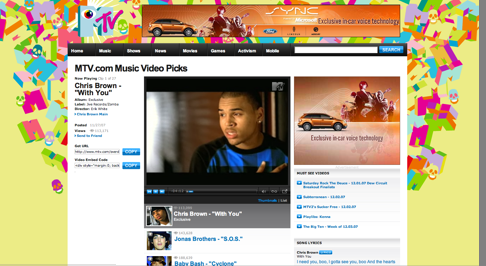 It is not enough to be a destination site anymore. Everyone now wants to become an ad network. MTV Networks on Monday announced that it has expanded its vertical ad network strategy by building ad networks around the service’s core properties.

Each vertical ad network will be called a “Tribe.” In contrast to what LinkedIn is trying to do with its new ad network (reselling access to its audience no matter where they may roam on the Web), MTV.com is basically reselling access to its advertisers . It is striking deals with other sites that share a similar audience (i.e., speak to the same Tribe) and offering its existing advertisers inventory on those hand-selected sites.

Each Tribe is made up of the partner sites and the people who visit them.  In this case, the “MTV Generation Tribe” is supposedly made up of sites targeting that hard-to-reach youth demographic that is interested in music, movies, videogames, sports, and sneakers. According to MTV Networks, each of its online properties has users that are staggeringly similar and can form the basis of an advertising Tribe. (Yeah, we thought tribes were made up of people, but MTV thinks that Websites can be grouped into tribes as well. Who knew?)

Once the Tribe is formed, MTV will sell advertising inventory and packages using demo-targeting, geo-targeting, day-parting and contextual targeting that it believes will capture the right audience for the right advertiser.

The MTV Tribe ad-network, which is anchored by MTV.com, launched today with Pepsi as its hallmark sponsor. CMT, Spike, and VH1 Tribes will be launching later this month and the Comedy Central Tribe will launch during the first quarter of 2009.

MTV Networks’ decision to categorize each service into Tribes is following a trend across the Web. In essence, companies are taking a destination site’s targeted audience and repackaging it into an ad network in the hopes that it will garner more revenue for all parties.  The strategy assumes that advertisers will want to spend money targeting that specific audience based on their shared interests.

This will only work for destination sites that attract enough unique visitors that have enough overlap with other Websites to make them want to sign up as advertising partners.  (MTV had 9.4 million U.S. visitors in August, according to comScore).  That is why both MTV Networks and LinkedIn are only signing up partners on a case-by-case basis.

Does every niche destination site need to become its own ad network, though?  Ultimately, it would make more sense for an existing ad network to offer a way to target all of these different communities of interest.  But then the ROI on the ads would have to more than make up for the fact that the money would be split at least three ways. (In MTV’s case, since it has its own ad sales force, the money is only split two ways).