Microsoft announced that it has improved its Mediaroom IPTV service to bring more show producers and IPTV networks to its platform.

According to Microsoft, its plan for increasing the value of Mediaroom IPTV contains three parts: increase advertising opportunities, make it easier for IPTV networks to port shows to the platform, and make IPTV more interactive.

The improved Mediaroom platform will let service providers using the service offer targeted, interactive advertising spots and have access to better data in order to target ads to specific groups. Microsoft didn’t elaborate on how that would be possible, but claimed more would be coming soon.

To make it easier to switch from another platform, Microsoft started the Mediaroom Migration program, which should give IPTV providers the tools they need to switch. According to Microsoft, before those providers switch, it will provide them with business and technical workshops to review set-top box portability, network compatibility, and audio-visual interoperability. 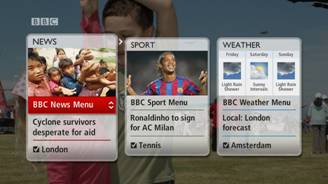 Microsoft is also trying to make Mediaroom IPTV more interactive, so the company will show how BBC shows can have a news, sports, and weather overlay during viewing so users can do more than just watch shows while using the service. So if you’re watching a show from the BBC and your wife comes in asking what the forecast will be tomorrow, Mediaroom will now let you pause the show and access BBC weather information, which will be displayed over the paused show. And while you’re at it, you can see what’s going on in the world by accessing the News section by clicking on the widget to the left of the weather widget.

Microsoft has been hard at work trying to improve Mediaroom and its newest additions should help a bit. But these improvements smack of desperation as Microsoft tries to increase the service’s presence. And in a hotly-contested market like IPTV, it will take more than some new ad-targeting and migration tools to make that happen. It will take broader adoption of IPTV, which is in the hands of Microsoft’s partners.