Ooyala, a video platform founded by seasoned Google veterans, has launched a powerful new analytics backend for its service that it calls Backlot Analytics. The new analytics software allows content providers to get an extremely detailed data on their users’ viewing behaviors, helping them tweak their ad placement and future content selection. Backlot Analytics will be available as a native application in Adobe AIR, and will also work in the browser.

Included among the features in Backlot Analytics are graphs that detail exactly when users rewind or stop watching a video. Publishers can use this data to determine when to position their ads (for example, they might find that users are far more likely to drop off if there is an ad in the first thirty seconds of a video, but that there is little impact if the ad comes after one minute). Ooyala features a drag-and-drop interface that makes such adjustments easy – users can simply drag their ads to a new place in the video timeline, and the system will immediately adapt for future plays without having to render anything.

The new version also includes support for Geo- and Domain-reporting, as well as an API allowing developers to integrate the platform into existing management systems. 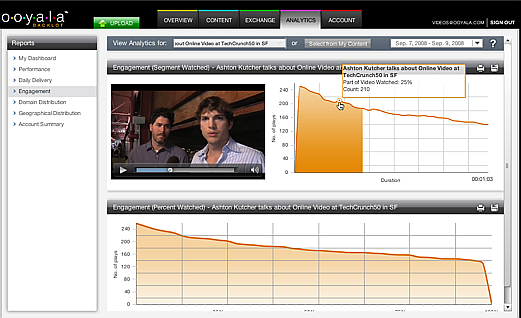 Ooyala launched in late 2007, and won Amazon’s AWS Startup-Challenge. The site has since partnered with thousands of media providers, including National Geographic, TV Guide, AOL, and Warner Brothers.

As a teaser for their analytics, Ooyala filmed the following interview at our TechCrunch50 conference, which has been syndicated to four websites in the last 24 hours. Here are some of the stats they’ve given us:

It received 2666 displays
It was played 228 times
173 people watched at least 50% of the video
People rewinded the video when Ashton was talking about creativity in online video and when he talked about monetizing content.