During the fourth session of TechCrunch50, three companies came on-stage and discussed ways to improve advertising, while one company told those in attendance how to streamline email and make it easier to manage email overload.

Burt’s Copybox is trying to be the “copywriter’s Photoshop.” In order to do that, Copybox attempts to make it easier to create online ads and tailor them to the user viewing them.

For example, advertisers can post something in the canvas that mentions Macs. After highlighting that word, users can then click a variable in the right and whenever a person accesses the site on a Windows machine, the mention of Macs will be replaced with a mention of Windows. In essence, the advertisements can be tailored based on who is browsing the site or what’s going on in the world.

Copybox believes that ads don’t talk to Web surfers because of the divide between copywriters and programmers. But with the help of Copybox, copywriters can perform all the programming needs with a simple word processing-like box and a drop-down menu featuring variables that will tailor ads based on the user.

MySpace CEO Chris DeWolfe and the rest of the panelists believe Copybox has some potential, but would work best with smaller publishers instead of bigger ad agencies, which already have systems they like to use in place.

Yossi Vardi was quick to point out that Google’s code service, code.Google.com could prove troublesome to the company now that it’s easier for programmers and copywriters to work together.

Click here to watch a video of Burt’s presentation 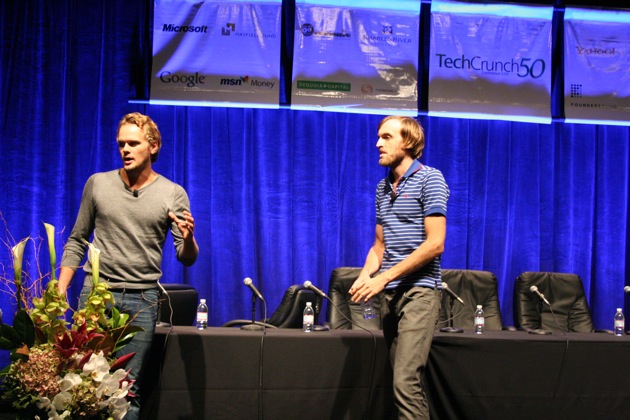 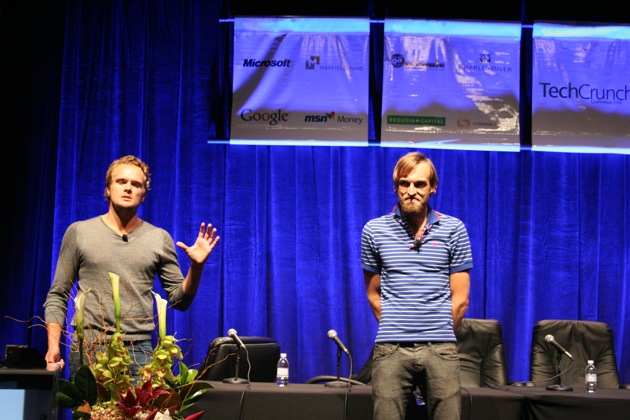 Adgregate Markets connects the world of display advertising with e-commerce. The first in the space, Adgregate markets replaces display ads, which take users away from a publisher’s site and brings them to a third-party store, and lets users buy products featured in ads without moving away from the page.

Adgregate Markets’ product is a widget that runs as an ad on a publisher’s site. If a user views the ad widget and wants to buy the product it’s advertising, they need only to click the description button under the ad and click “add to cart” to buy it. From there, the user can either pay directly in the widget by inputting credit card information or keep buying products via ads elsewhere.

To ensure security, the widget is always secure during purchase. The company said that even though ads can be displayed on insecure sites, the buying process is secure.

The entire ad unit can be created in Adgregate Markets’ service and users can create widgets on-the-fly exactly to the spec of the required ad unit size on the publisher’s page. Once activated, it goes live on the site.

To increase the reach of ads, publishers can “grab” the widget and embed the code into their site. Publishers, advertisers, and Adgregate markets will share all the revenue.

Not too much was said about Adgregate markets because each panelist agreed on the most important element of any startup: it’s a great idea that will make money and address a need in the market.

Chris DeWolfe at MySpace was quick to point out that Adgregate Markets’ idea could be used anywhere on the Web and has a strong business model in place that would attract publishers and advertisers, alike. 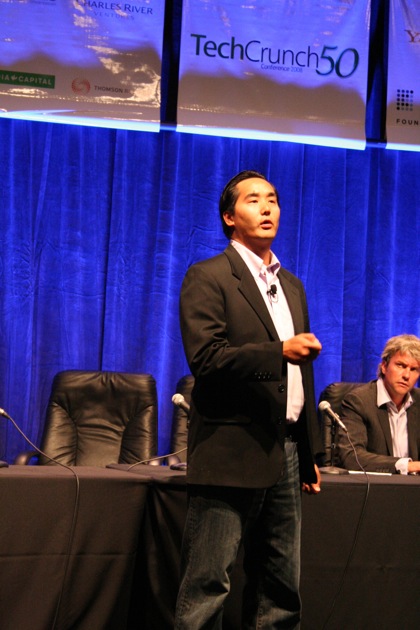 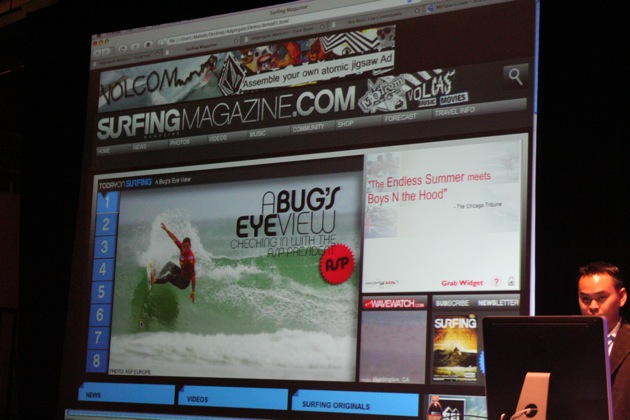 According to AdRocket, most email newsletter advertisements are poorly targeted and most users block those ads, so many times, no one sees any revenue from email newsletters.

To fix that, AdRocket aims at working with major newsletter providers like The New York Times and CNET and collect demographic data and keywords from newsletter subscribers. Once collected (it does so anonymously to alleviate privacy concerns), the keywords that are most likely to yield revenue and have ad units available are shown. From there, a score based on the number of ads and the revenue potential is determined and advertisers can input those ads into their newsletters to (hopefully) increase ad revenue.

Chris DeWolfe at MySpace and Marc Andreesen noted that there are some “deliverability” issues with AdRocket. How will the company make sure that newsletters from the companies it works with are actually getting to the users?

Mark Bennioff and Ash Patel noted that the size of the newsletter shouldn’t matter as much as AdRocket believes it does. Instead, the panelists believe the company should focus on working with smaller newsletter companies and worry more about larger newsletters as it grows.

Click here to watch a video of AdRocket’s presentation. 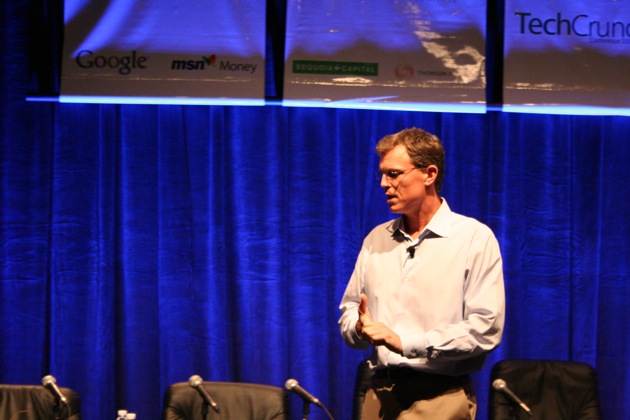 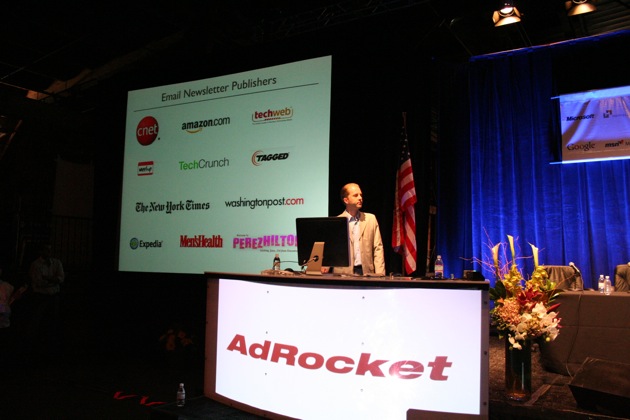 OtherInbox helps solve the problem of email overload. According to the company, it believes that as more people sign up for newsletters, product updates, and countless other services that send emails, inboxes are getting inundated with extras that reduce efficiency.

To solve that problem, users can sign up for OtherInbox (it’s free) and create vanity email addresses for different services. So if you want to receive product announcements from Amazon via email, set up an OtherInbox account called “amazon@yourname.otherinbox.com” and only emails from Amazon will be sent to that address. The same can be done for any place you input email addresses.

When you open OtherInbox, it features folders from every site you signed up with the different emails in a left pane. Once you decide which you want to read, simply click on the email box and you can view all emails sent to that address.

But OtherInbox isn’t just reserved for stores or newsletters. The service lets you create email addresses for anything and can be used to filter your email.

Even better, OtherInbox will soon offer features that can collect shipping notices, receipts, and bill payment reminders, and collect date information from each. Once collected, it will add those dates to Google Calendar, iCal, or any other calendar app.

To block spam messages, OtherInbox uses a “block” button, which will then delete all the spam in a particular inbox and deactivate that address so you won’t get anymore spam.

OtherInbox is currently in private beta, but will be in public beta soon.

After finishing, Other Inbox received a resounding applause from the crowd, which obviously appreciated the opportunity to filter email into a variety of inboxes.

The panel was dominated by a spat between the company’s creator and Yahoo executive vice president Ash Patel, who claimed similar functionality is already available in Yahoo Mail. OtherInbox’s founder disagreed and said that his service does much more than what’s already found in Yahoo’s offering.

The rest of the panel concurred that it was a good idea and Mark Bennioff said that he would use it for trips to Los Angeles and elsewhere to manage his email and itinerary.

Click here for a watch a video of OtherInbox’s presentation.. 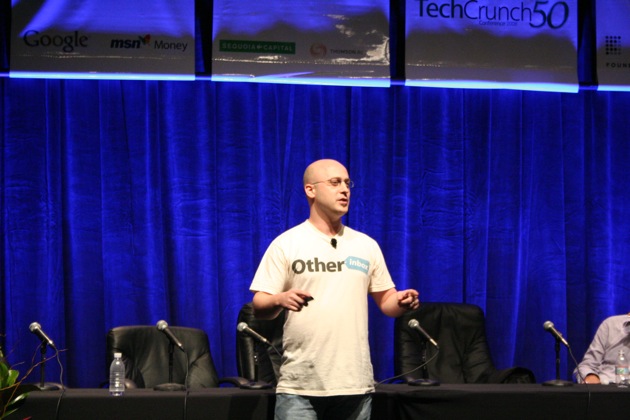 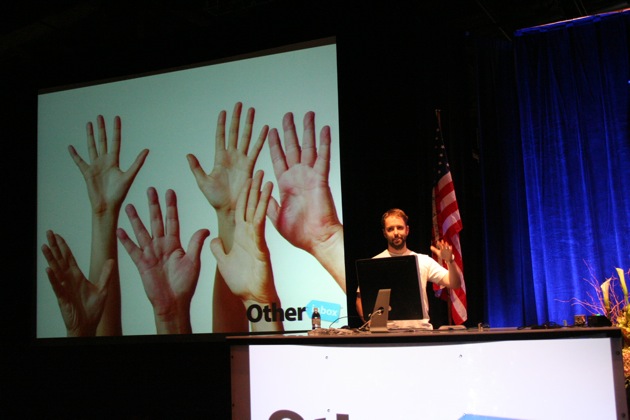