Wixi, the social filesharing network that debuted at TechCrunch40, has finally been released to the public. The site offers a media-centric virtual desktop that allows users to play their media files from any computer that supports Flash, and also serves as a service for file sharing between friends. Any users that sign up by October 1 will get unlimited storage for life, while members joining after that date will need to pay $5 a month for the privilege (though they will still be able to get a free account with a 3GB limit). 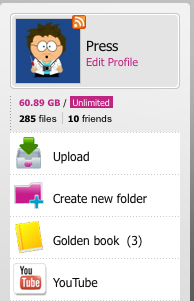 After creating a profile on the site, users upload their media files to their desktop, which they can then categorize using a familiar drag-and-drop folder system. Each file can be streamed from any computer that supports Flash from within the service’s media player. Users can also browse through files through the site’s search feature or their friends profiles, and when they find something they like, they can save it to their virtual desktop for future reference. However, you will only be able to stream this content – you won’t be able to download a file unless you were the original uploader.

Beyond Wixi’s standard web interface, there’s also an iPhone version of the site available at http://www.iphone.wixi.com, with plans to expand to more platforms like Nintendo’s Wii in the future.

Wixi was initially planning to launch to the public months ago – but it quickly became obvious that the service was facing some glaring piracy issues. The site was originally going to let users share all of their media with public, allowing strangers to peruse their files at will. Unsurprisingly, a large number of copyrighted films were quickly posted to Wixi’s servers, all of which could be easily streamed for free after conducting a simple search. 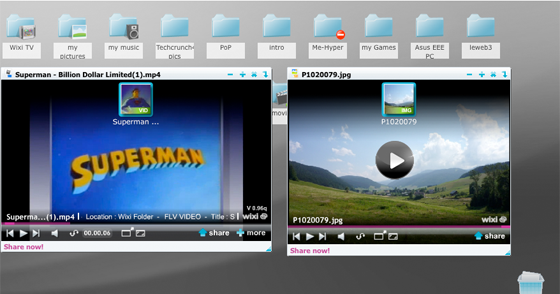 Wixi has since addressed most of these issues, though some copyright holders may still take issue with the service. Files greater than 100 MB are now restricted from public sharing – you’ll have to be someone’s friend if you want to stream a large file from their account, which makes movie sharing difficult. But that doesn’t solve all of Wixi’s problems: copyright owners will still object to letting even a small group of friends stream movies to eachother. And everyone will still be able stream smaller files like TV shows or music from anywhere, which will still make Wixi a lawsuit target.

While it will likely face a number of legal battles, I like Wixi. The site is an intuitive alternative to filesharing services like RapidShare or the standard Email route, and its interface is very polished. The mobile access is a nice touch too, allowing users to access their music and videos when they’re away from a computer.

For another web desktop, check out Stixy, which is more concerned with online document collaboration than file sharing.