Yahoo has highlighted a few more implementations of BOSS, the search API it launched in early July that allows third party websites to incorporate Yahoo search functionality seamlessly into their sites.

This is the second time Yahoo has showcased the fruits of BOSS developers. In early August, Yahoo drew attention to 4HourSearch, the Cuil knock-off formerly known as Yuil; PlayerSearch, a sports-focused search engine; Newsline, a tool for plotting news items on a timeline; and Tianamo, a 3D search visualization tool for Windows machines with Java installed. 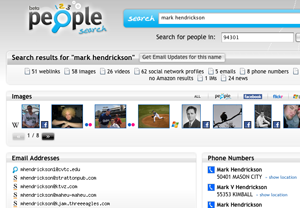 123People is a search engine designed to help you find information about ordinary people. It supposedly returns the best results for people living in Europe, although the index includes those living in the United States as well.

123People has used BOSS to show web results and images about people alongside the email addresses, instant messaging accounts, documents, phone numbers, and other information it collects from elsewhere. Unfortunately (or fortunately?), I couldn’t find more than a few photos of myself when searching with my name, even when I told it which area code to look within. 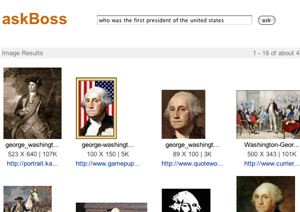 Built by a Yahoo employee, askBOSS is like Powerset for images. It processes natural language (i.e. “who was the first president of the United States?”) and returns images that are intended to “answer” your query.

In my tests, it worked very well with some queries (“who is the lead singer of the Rolling Stones?”) and returned amusing but inaccurate results for others (“what was the first machine gun?”). But then again, this kind of search isn’t supposed to be easy. 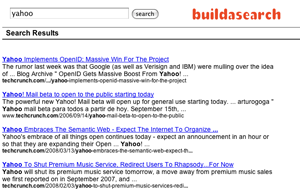 BuildaSearch intends to remove the whole programming aspect of implementing BOSS for your website. It simplifies the setup process by letting you pick just the colors, images, and scope of search results you desire.

It took me a a grand total of 30 seconds to set up site-specific search for TechCrunch, found here. Unfortunately, our logo only shows up on the first page so the engine isn’t truly white-labeled.