Raptr, the social network that revolves around gaming, has launched in public beta. The robust site allows users to keep tabs on what their friends are doing throughout the gaming world, and also offers gaming recommendations, accomplishment updates, and a host of other features.

The site is designed to appeal to casual and hardcore gamers alike. In fact, Raptr avoids using the term “gamer” entirely, instead choosing to describe itself as a “social platform for people who like to play and discover games” – founder (and former competitive gamer) Dennis Fong says that many people associate the word “gamer” with a hardcore audience, but Raptr is for everyone. 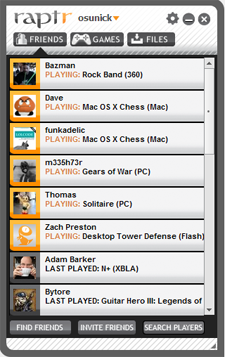 Gamer Buddy List
The feature that will likely see the most use on Raptr is its buddy list, which allows users to see what games their friends are playing across a variety of platforms. While this can already be accomplished on a number of gaming networks, including Xbox Live and Steam, there isn’t a comprehensive service that keeps track of this information across multiple networks. The site offers downloadable clients for both Mac and Windows, which will track what games are being played and update the server accordingly (users can also use a Facebook Chat-esque interface from within the browser).

If Raptr can become the de facto standard for gaming buddy lists, it will be a huge success. Though it may come as a surprise to some, one of the most important facets of modern gaming is the social aspect. Gamers often align into Clans, and will readily boot up a game whenever they see a familiar screenname pop online. Unfortunately, existing networks are proprietary and only allow users to see who’s logged on to a single network.

Phat Lootz Newsfeed
Another impressive feature on Raptr is its news feed, which allows users to keep track of their friends’ activities thoughout many of the site’s supported games. The site keeps tabs on a wide variety of data, including in-game achievements from Xbox Live and high scores from Guitar Hero. Some games (particularly those with a supported API), allow the feed to get very detailed – you could conceivably use the site to track all of your quests for loot in World of Warcraft. Others send updates with more generic messages, like “Jason Has Just Played Chess”.

Gamers can also use the site’s profile section to display a list of their achievements, including the Gamer Badges seen on the current generation of consoles. While this may seem a bit silly, many gamers are extremely enthusiastic when it comes to earning in-game trophies and awards, and will value any opportunity to display their merits to a broad audience.

Automatic Game Updates
When we first wrote about Raptr in February one of its biggest selling points was its ability to automatically update PC games, saving users the hassle of hunting them down themselves. Since then, the feature seems to have become less important to Raptr, in part because automatic updates only apply to native PC games, which only constitute a fraction of Raptr’s game database.

At launch the site includes support for thousands of games across platforms including the console systems, native PC games, and web-based Flash games. Unfortunately, many of these games don’t make their data accessible – Raptr has to rely on a number of different methods to keep gamers’ activity status up to date, though some developers have made this easier than others. The issue is best demonstrated by today’s consoles: Microsoft has given Raptr access to Xbox Live backend, allowing the site to efficiently monitor user progress across all games. Conversely, Sony has yet to implement an accessible API, which means Raptr can only support select games.

In the long run, we’ll likely see gaming networks become more open, as cross-platform gaming buddy lists and accessible rankings can only help the industry. Raptr is positioning itself as a central hub for these services to play nicely, which would make it immensely popular. But as a casual gaming site, it may have some issues – I have a hard time picturing a casual game player taking the time to download one of the service’s clients or fill in a profile.

Raptr’s social networking shares a number of features in common with Rupture, Napster-founder Shawn Fanning’s startup that was aquired by EA for a reported $15 million. EA apparently aquired Rupture for its technology – the site, which was originally developed as a social network for World of Warcraft players, never launched to the public.