Ponoko ID is a new service from Ponoko that allows customers to “bid” on projects that they’d like to have build. As you probably recall, Ponoko.com is a rapid prototyping/design service that allows you to upload, build, and assemble projects to your exacting specifications.

Rather than making customers to design their own items, Ponoko ID allows customers to request a certain project and describe it in general terms without having to draw or design anything – although image links are encouraged. Designers then bid on the project and the customer and designer decide on pricing and distribution.

Shoppers use the new service to post requests for custom-made individualized goods. Requests are sent to a selection of Ponoko’s pool of more than 10,000 members who then have the chance to put forward a bid to make the item.

Ponoko Chief Strategy Officer Derek Elley says Ponoko ID is a way for shoppers and designers to collaborate to create something unique and special. “What’s exciting is that Ponoko ID makes getting something made just for you as easy as sending an email,” he says. “Shoppers no longer have to accept ‘one size fits all’ mass produced goods but can now save a bunch of money to get their ideas turned into reality by expert designers worldwide.” 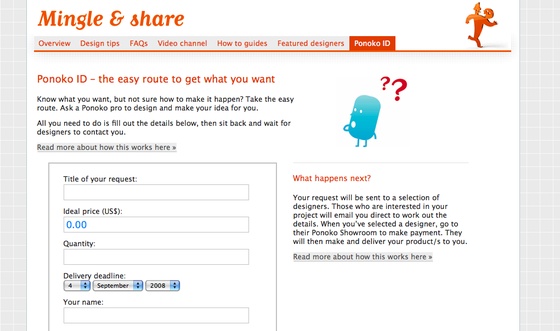 Ponoko originally – and fairly obviously – suffered from the too many customers/not enough product problem. Hopefully this new matching system will fill up the Ponoko shelves with cool – and commissioned – goodies.