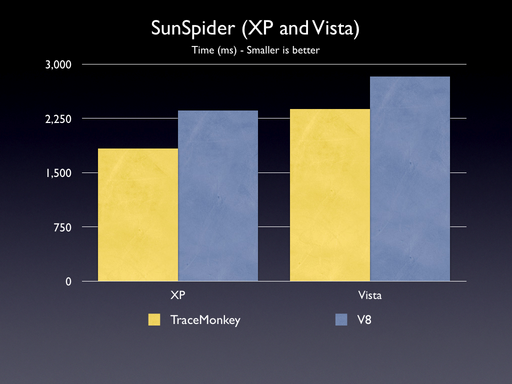 The dust hasn’t even settled on Chrome’s release and already Mozilla is feeling the pressure. The company today released a series of benchmarks showing Firefox 3.1 will be faster than anything Google can muster with Chrome.

Chrome is running V8, an open source Javascript engine, which Google claims, is faster than anything currently offered on the Web. And based on our tests of Chrome, we tend to agree.

But in the upcoming release of Firefox 3.1, which should be available by the end of the year, Mozilla will employ TraceMonkey, a new engine that according to one of its coders, Brendan Eich, will easily eclipse even the fastest instance of Chrome.

Mozilla is quick to point out that TraceMonkey has only been in development for a few months and will only get better before it’s rolled out later this year, but the company has a vested interest in seeing Firefox come out on top in its benchmark testing, so all figures should probably be questioned, to say the least. And the same goes for Google’s five benchmarks.

For now, Chrome is the fastest browser in the market and anyone using both Firefox and Chrome will find that out quickly. But once Firefox 3.1 hits the Web, we’ll find out if Chrome has what it takes to stay on top after TraceMonkey becomes Mozilla’s engine of choice.