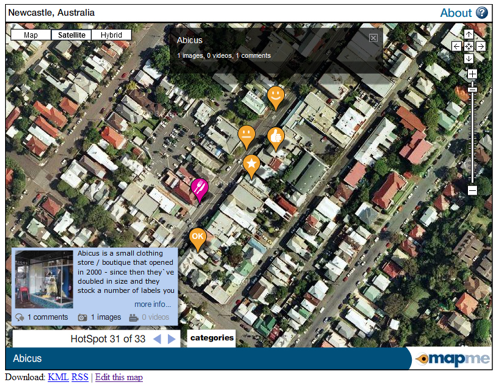 MAPme announced today that it has released a Google Maps widget that will let users perform tasks that they are already capable of performing with the run-of-the-mill Google Maps application, but will let them embed the flash app as a widget anywhere they can edit HTML, which should make frustrated Google Maps users happy.

According to the company, the MAPme widget is a pure flash object that lets you add your own images or YouTube videos to your map’s hotspots. And in case you need them, the widget lets you populate the map with a series of markers. To add a social flavor, the MAPme widget lets users create and contribute hotspots that may be of interest to others.

MAPme is quick to point out that this widget can do what Google Maps can’t, but I’m not so quick to agree. You can already add photos to Google Maps any Google Video or YouTube video can be embedded without much trouble at all. That said, the MAPme solution does seem to work well and might be worth a look.

The Flash widget is available now and can be used on any site that lets you edit HTML. And although Facebook and iPhone versions are not available yet, the company promised them in the next few weeks.