Concerts hold a unique position in the entertainment world. They have a huge audience, with an estimated 70% of American adults attending a concert every year. And, unlike movies and music, they’re impossible to pirate (sure you can always get a bootleg recording, but people go to concerts for the experience, not just the music). But while a number of startups have sprung up trying to connect users with their favorite artists as well as new ones, few of them seem concerned with the the show itself.

BlueHaze, a San Francisco-based startup launching today, is looking to capitalize on this oversight. The startup is taking a multipronged approach with its solution, and now offers Facebook application, iPhone App, and a web portal to tie the service together. Founder Mark Shedletsky says that most other concert sites are concerned with helping users find a ticket they’re interested in, BlueHaze tries to enhance the experience before, during, and after each show. 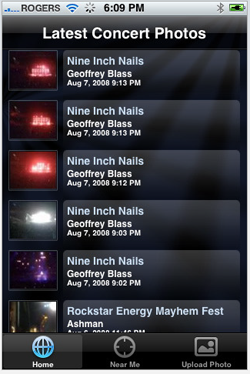 At first glance, BlueHaze’s web portal doesn’t seem to offer anything that isn’t already out there. The site has a listing of artists and venues, along with a social network to help connect concert attendees and fans with similar tastes. Users can purchase tickets through the site (the company earns money through affiliate fees), and there’s an online listing of each user’s past concerts so they can keep a digital scrapbook for future reference.

What excites me most about BlueHaze is the company’s iPhone app, which allows users to upload geotagged photos a public album for each concert, which is accessible both during and after the show. I like the prospect of being able to share a photo with everyone at the concert (perhaps of a bandmember backstage, or an especially good shot of the guitarist rocking out). This feature won’t be appealing until the application becomes widespread, but the company says it has already seen over 40,000 downloads since its softlaunch.

BlueHaze will be seeing competition from a number of other concert and music-centric sites, including Songkick and iLike. Also notable is DeepRockDrive, which tries to bring audience interaction to webcasted concerts.