Psismic has a novel approach to internet dating. Rather than simply stating who you are, or taking a personality profile, Psismic lets users upload interesting pictures and videos, text posts and links. Then others indicate if they like what you’ve posted and the site serves up matches based on who likes the same items.

The sign up process is straightforward and presents only a single page of questions. It has three open entry boxes for you to describe who you are, who you’re looking for, and what are your interests. Someone at Psismic must like Twitter because each box is limited to only 500 characters. That’s not an awful lot, but then the site is more about defining oneself with pictures, videos and posts rather than mini autobiographies. 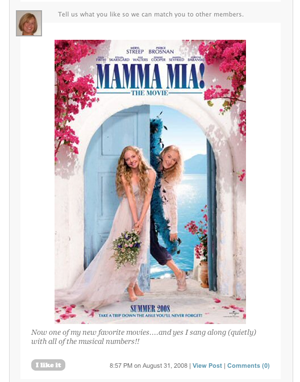 The site is minimal in nature, well laid out and easy to navigate. There’s really not a lot to it. The main page shows the all-important “Post Stream” which shows all the posts from other users. One user left the caption “Gentle Giant, best band ever. Really.” with a video of a band playing the most horrendous melody I’ve ever heard. Someone out there might like “kaden’s” favorite band. Perhaps they’d also like kaden, but they probably don’t like me for the somewhat cynical comment I left on the post.

Psismic is StumbleUpon-esque in that users can browse random items that other people think are cool, and sometimes they really are cool. Sometimes they’re really not, but that’s ok because it’s still amusing. At least they provide a window into other users’ psyches and somehow indicate whether you’d get on with them well.

There’s no user search functionality on Psismic. Instead, you browse the post stream and click on posters’ images to learn more about them and see the other items they’ve posted. If you like what you see, you can “request a match.”

Most people just aren’t that good at self-analysis and many people lie on dating sites anyway. So Psismic offers an entertaining alternative approach that gives internet daters a chance to be a little more honest above themselves, if a bit indirectly.

Psismic charges $19/mo or less for 6 and 12 month commitments.