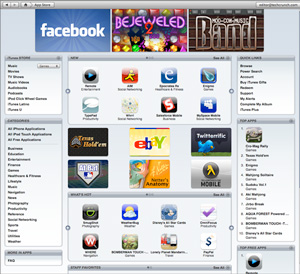 Apple will release an application next month that will provide users with interactive albums, which will include lyrics, behind-the-scenes images, and exclusive artwork.

According to Music Week, Apple will make the app available to users in tandem with the release of Snow Patrol’s upcoming album, A Hundred Million Suns. The app will add the extra features to more iTunes albums over time, but because it will be made available through the company’s App Store, it will only provide the extra content on the iPhone and iPod touch.

Apple’s decision to offer such an app is ironic, to say the least. The company has consistently said that it doesn’t want third-party developers tapping into iTunes music, resulting in apps like Tap Tap Revenge being prohibited from accessing your iTunes library during gameplay. Evidently, it wanted to reserve that functionality for itself. Or could this signal a willingness to allow third-party developers to access it in the future?

The new app also highlights an important point: CDs may lose one of the advantages they have clung to in their losing fight against digital downloads. Now that iTunes albums will offer the extras already found in CDs, the latter is quickly becoming even more irrelevant.

The app should be released around October 27 when Snow Patrol’s album hits store shelves. So far, pricing is unknown.