It’s not enough that you watch the political party conventions on TV, read the political coverage in newspapers, and the reactions in blogs. Some people are not reacting on blogs, they are reacting on Twitter. But how do you follow all of that raw political discourse, and do you even want to?

Stephen Taylor, a Canadian blogger and political analyst, has hacked together govtweets, a site that constantly updates with the latest Tweets that mention any of the political candidates (McCain, Obama, Palin, and Biden). He also created a Facebook app. The Tweets automatically update and scroll down the page. There is no way to search for past Tweets, and once a Tweet scrolls off the page there is no way to find it again. So Govtweets is nothing more than a snapshot of the national conversation, but it is still fascinating to watch it unfold.

GOP Alaska State Senator: Palin Not Ready to Be Gov/VP: “She’s not prepared to be governor. How can she be p.. http://tinyurl.com/5gp6mk 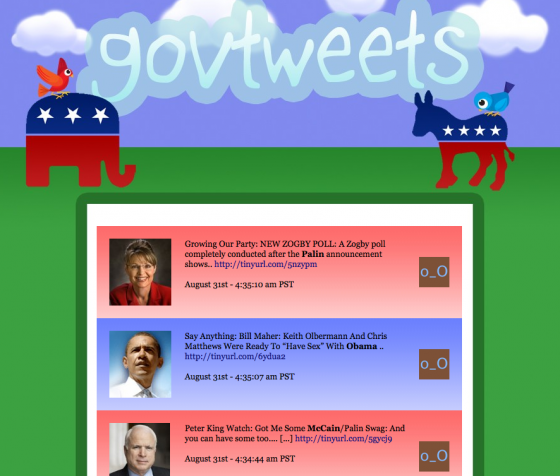