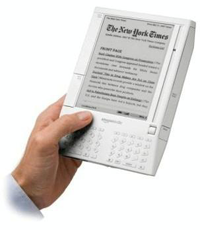 More rumors about the new Kindle are emerging, which we first wrote about on July 15. The first device will have a similar sized screen as the existing model but will have a much enhanced form factor. The second will be a large screen device aimed at students and will come later.

Somewhere around a quarter of a million Kindles have been sold to date and Amazon is clearly pushing out the last of the current units via a credit card promotion on their site that drops $100 off the $359 device.

Kindle is currently tracking the iPhone/iTunes model – Amazon sells the Kindle for a profit and then makes more revenue on content purchases from the Kindle site that they run. I don’t know how much margin Amazon makes on each Kindle sale or how much they make on average from content purchases. But if they really want to push ebook adoption by the masses and stay at the center of that universe, I’d recommend a dramatic shift in business model.

Imagine if Amazon launched a licensing program that gave hardware manufacturers the ability to build Kindle clones, along with an incentive to sell them at near-zero margins. Amazon would give those manufacturers access to the core Kindle hardware specs (there’s no real magic there anyway) and the right to call it a Kindle device so long as they also put the core Kindle software on the device. That software links the device to Amazon’s store, meaning downloads revenue flows through Amazon.

Amazon would then share a percentage of net margin generated from downloads with the hardware manufacturers.

Very quickly we’d see a wide variety of Kindle devices, all competing on price, features (large and small screens would just be the start) and form factor. Hardware manufacturers, who are all constantly trying to squeeze a tiny bit of margin out of their products, would suddenly have another revenue stream to tap.

Amazon would continue to control the signature device and would likely be able to sell them at a premium since a lot of consumers would prefer the Amazon brand. But a whole ecosystem could emerge around the device, including multi-function versions that do other things. And each of those devices would be linked to Amazon and making money for the company.