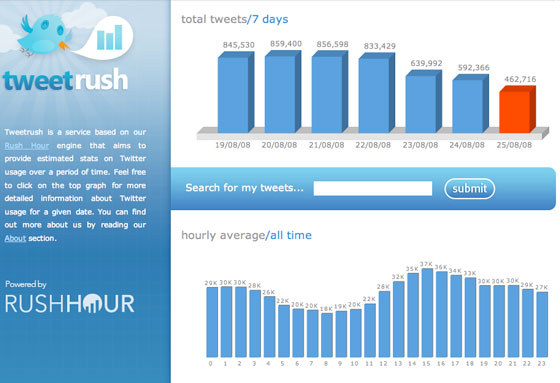 Ireland based Tweetrush, a new analytics service around Twitter, launched a few minutes ago. For now it’s fairly straightforward – it shows aggregate Twitter usage by all users, and you can drill down to the per user level as well.

Total Twitter usage according to TweetRush is approximately 850,000 messages per day, which is far less than the 3 million/day that we reported on in late April. Tweetrush isn’t able to track direct messages or messages from private users, but the numbers are still much lower than anticipated. Either something is wrong with the data, or Twitter usage is far lower than we expected.

The data is coming via Gnip, which was given access to Twitter’s XMPP firehose last month. Tweetrush founder AJ McKee says they believe the data is being under-reported based on scraping checks they’ve done on Twitter, but that for now Twitter isn’t helping them or Gnip correct data usage. Now that they’ve launched, perhaps Twitter will correct any issues.

The site is a demonstration of the technology behind a in-development analytics product for developers called Rush Hour, which will be launched later next year.