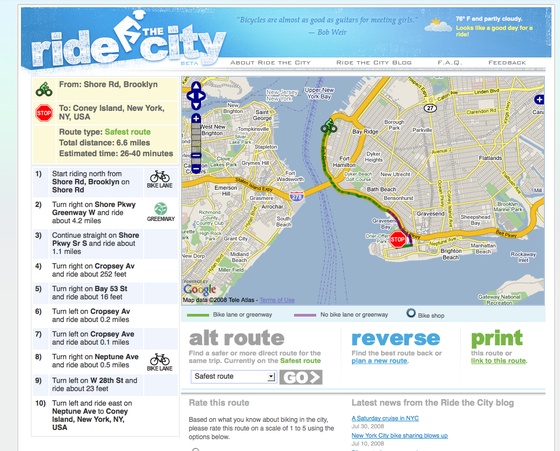 RideTheCity is a cool mash-up application that allows you to plan bike routes based on safety and speed. By typing – or selecting – a start and end location in New York City, the application will find the safest and quickest routes by factoring in bike routes for “safest” trips and the shortest travel distance for the quickest trips. 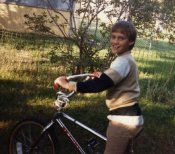 The project is run by three bikers, Jordan Anderson, Vaidila Kungys, and Josh Steinbauer (Full disclosure: I went to college with Jordan but found out about this via NPR.) who connected Google maps to a few basic heuristic rules and added a cool logo. The GIS data comes from the city itself and is merged with Google Maps for display.

“Sometimes the most daunting thing about riding a bike in New York is figuring out the best route to take. How do you get to the bridge entrances? What’s the best way to Central Park from the Hudson River greenway? We created this website to help beginning bicyclists answer those questions,” said founder Jordan Anderson.

The system works well. In a trip from my house to Coney Island, RideTheCity suggested a nice route along the water. Unfortunately, however, its zeal in finding the safest routes sometimes brings up incorrect directions. For example, the system routed us through a secure military base during one trip. Had we not known that the road was closed we would have been sent on quite a ride.

Sadly the application only works in New York right now but there are alternative sources for other cities. The programmers used NYC’s LION GIS data to find and build routes.

Every time you search Ride the City, we look through more than 125,000 records in a database. Most of that data comes from the City’s LION GIS data. The City’s LION file does not contain bicycle facility data, so we made a Freedom of Information Act request to the NYC Department of Transportation and NYC Department of City Planning. That got us a little closer, but we still had to put in dozens of hours of data cleanup to get everything working more-or-less correctly.

The application is similar to hopstop.com in that it offers a focused window on geographical data aimed at a particular commuter – in this case, bikers. They’re currently working on fine-tuning the application to improve usability.