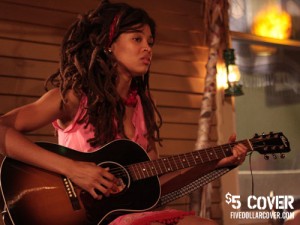 In digital content news, MTV New Media has teamed up with “Hustle & Flow” director Craig Brewer for real-life music drama about the Memphis music scene. Called $5 Cover, the 15 webisode show will feature working Memphis musicians, their music and the drama of their lives.

$5 Cover will be available online at www.fivedollarcover.com, and on mobile devices. Along with the show, MTV hopes to build its digital empire by offering social networking applications and other digital tools for fans of the show; MySpace and Facebook widgets created for “$5 Cover” will continuously feed related content, including exclusive music performances, video blogs and video tours of popular Memphis juke joints.

Brewer said in an MTV statement:

“Content is now a click away and distribution platforms can fit in the palm of your hand. Everyone in entertainment is trying to figure out what to make for the online ‘snacking’ culture and how to craft a successful business model. I think the best any filmmaker or producer can do in this new medium is embrace a frontier spirit, charge in head first, and celebrate what you love…And now people from around the world, at any time of the day, on a multitude of devices, will be able to click and snack in my own backyard with some of the coolest cats this side of the Mississippi River.”