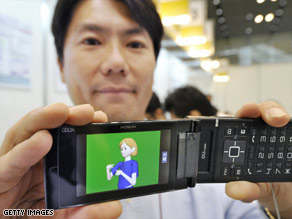 Word on the street is that with its supersaturated cell phone market, Japan is looking for larger, overseas markets, possibly even targeting U.S. consumers for its shiny, super fast handsets.

The AP reported that the “aggressive push” to market handsets abroad is a collaboration between the government and an industry group of Japanese carriers and handset manufactures. The first technology the initiative hopes to take global is the Wallet Phone, a handset that mixes mobile payment capabilities with top of the line cell phone features. The handsets use embedded FeliCa chips (designed by Sony) that allow users to pay for purchases, train tickets and items in compatible vending machines by just waving their phone.

While folks in Japan have been using mobile phones to pay for things since 2004, the technology is not yet widely available in the U.S. and the missing infrastructure in stores, stations and vending machines may be a hurdle for the Japanese initiative.

Other difficulties include Japan’s plans to spread the good news about 4G technologies, while the U.S. is still trying to make 3G more widely available.

Exact details of the technology pushing plans are not yet available, but the ministry did also say that it is planning missions and seminars to help educate international communities about Japan’s technology.