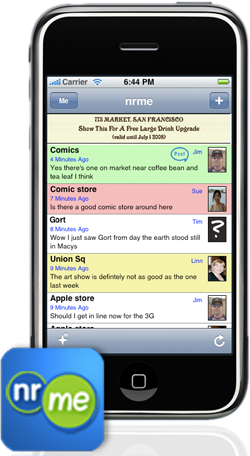 Last June we got a sneak peek at nrme, a location-based message service for the iPhone. The service behaves like a regional Twitter, but is geared towards sharing information rather than chatting – it’s sort of like a neighborhood bulletin board in the cloud. Instead of using a follow system, nrme makes all messages public to users within a 9 block radius (users can still private message each other if they’d like).

Today, the app has finally gone live in the App Store (despite rumors to the contrary, the approval process was only a matter of a week or two, not months). After a quick test run I have a few gripes about the interface, which is still a work in progress, but my biggest concern is the absence of content that has been posted by anyone “near me”. This isn’t unexpected because the app just launched, but I worry that the service will never be able to get a meaningful amount of information. To help combat this “chicken and the egg” problem associated with a new app and its lack of users, nrme is focusing its marketing efforts in San Francisco, even though the app is available to the entire country.

I really want this service (or another one like it) to take off. The prospect of being able to let people know when a bar is full or a store has just gotten a shipment of a hot item like the iPhone 3G is very appealing – and the altruistic nature of it would build a sense of community. The fact of the matter is that there are dozens of location-based applications on the iPhone (some of which are very similar to nrme), but most of them have gone largely unnoticed and lack content. At this point, it is beginning to look like we might have to wait for an established player like Twitter or Facebook to implement geo-awareness before we’ll see a location-based app that’s actually useful.

Other geo-aware services with some similar features include GeoGraffiti and to some extent, Twinkle.