Tim O’Reilly is tearing his hair out because he thinks that we link too much to CrunchBase, our startup database. He levels the unforgivable charge of self-linking at us, and puts us in the same company as the New York Times (which in this case is not a good thing). In his post (which I link to above), he makes the following connection between how we link to Crunchbase and how the New York Times constantly links to itself:

Now, rather than linking directly to companies covered in its stories, Techcrunch links to one of its own properties to provide additional information about them. I noticed the same behavior the other day on the New York Times, when I followed a link, and was taken to a search result for articles on the subject at the Times (with lots of ads, even if there were few results).

Tim is simply confused here. We’re not nearly as bad as the New York Times, which I agree generally does a really poor job of linking to any authority other than itself. (But it depends where you look. Some of its blogs are linking out more and more. Maybe the rest of the paper will take notice). Moreover, company links on TechCrunch are usually not the most prominent link in any given post. Most posts include other outbound links to other blogs, news articles, press releases, and the like.

As far as CrunchBase is concerned, we have no hard and fast rules for linking to company profiles there. Sometimes we link to the CrunchBase profile, sometimes we link directly to the company’s site. More often than not, we do both. Sometimes we’re lazy or pressed for time, and only link to one or (gasp) none at all. But my preferred method, for instance, is to link the company logo in a post to the CrunchBase profile and link the first mention of the company in a post to its Website.

Am I ruining the Web by doing that? I thought more information was better. Yet O’Reilly warns ominously about self-linking:

When this trend spreads (and I say “when”, not “if”), this will be a tax on the utility of the web that must be counterbalanced by the utility of the intervening pages. If they are really good, with lots of useful, curated data that you wouldn’t easily find elsewhere, this may be an acceptable tax. In fact, they may even be beneficial, and a real way to increase the value of the site to its readers.

To be fair, O’Reilly does give kudos to CrunchBase itself for linking out to other sources. And he is correct that we do try to link to CrunchBase as much as possible. But that is because we think it’s a really good resource, a place where readers can get up to speed on a company at a glance. Each company profile has a succinct description of what it does, how much money it’s raised, who are its founders and investors, who are its competitors, as well as recent posts about the company from all over the Web.

Oh yeah, and its free. There’s plenty of M&A and acquisition data in there that we are not trying to charge for. In fact, anyone can take the data in CrunchBase and repurpose it on their own Websites through the CrunchBase API.

O’Reilly ends with a suggested rule of thumb for self-linking:

Ensure that the pages you create at those destinations are truly more valuable to your readers than any other external link you might provide.

Again, I couldn’t agree with him more. And CrunchBase more than passes that test. But don’t take my word for it. Do a Google search for some of your favorite Web startups, and more often than not you will find a CrunchBase profile on the first page of results. And it’s not just little-known startups either. try searching for Twitter or Friendfeed, and you’ll see the same thing. We do have some Google juice at TechCrunch, but even we couldn’t do that on our own.

Just to be clear, I like crunchbase. I think it’s a great idea. However, I’d like links to crunchbase to be marked as such. You might try using Apture to provide that visibility (as well as other cross-linking capabilities.)

Mostly, though, I was trying to point out a trend, and sensitize people to it, so that it doesn’t creep up on them. We’re all like frogs in slowly warming water. Eventually it boils. But often, we don’t notice things that we should until too late. 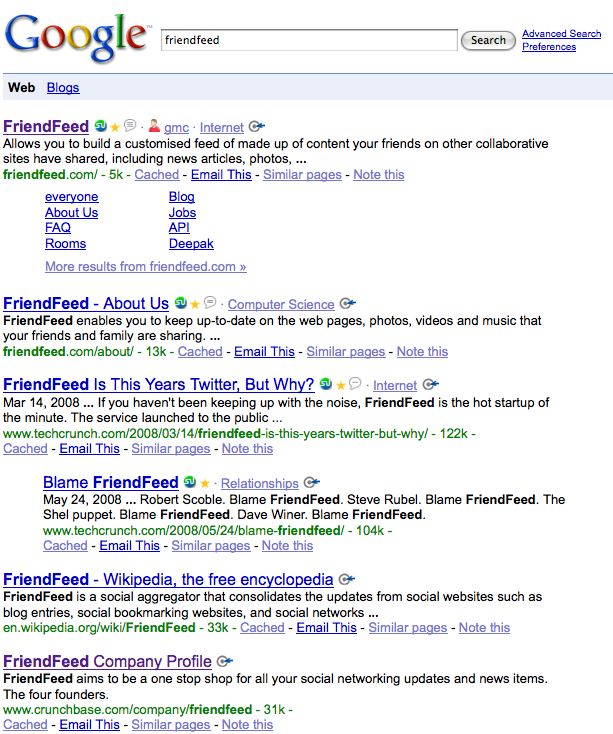