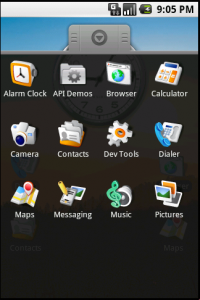 We’ve got good news, and we’ve got bad news.

The good news: After a five month stretch without a publicly available update to the Android SDK, Google has finally pushed a new release. They’ve also released a Developer Roadmap for the rest of ’08 which, amongst other things, re-re-re-confirms that device(s?) are on the way for Q4 ’08.

With all past SDK releases considered “early look”, the Android 0.9 SDK r1 release is the first aimed at compatibility with the 1.0 version we’ll be seeing on handsets in just a few months. It’s not quite final yet, but it’s getting closer – developers can now crack away at their applications without having to worry too much about rewrites.

The new release also shows off Android’s latest look (shown above), along with a handful of new applications and improvements. From the announcement:

Also released today is Google’s Developer Roadmap for the rest of 2008. Coming sometime in the next four months are the Android 1.0 SDK, the first Android handsets, the source code, and a “Key Announcement on Android Developer Challenge II”

With worth-while news finally making its way out from the Android camp again, things in the smartphone industry oughtta be real interesting over the next year or so.