Swapping sites are nothing new (see Dig N’ Swap), but in Japan we like to trade our junk via our mobile phones. That is what the Japanese social sharing service Sharemo is all about. The site’s ambitious idea is to contribute to overcoming Japan’s throwaway society.

This is how it works: Users can offer any item they don’t need anymore (DVDs, comics and clothes are especially popular) on Sharemo. If the item is useful to another member, it can be rented, used and then relisted. This procedure is repeated until one Sharemo user decides to keep the item. The system keeps track of all actions and allocates points to active members, which can be donated or redeemed to rent items.

Sharemo’s crucial point is the complete absence of money and the reliance on trust among the members. In Japan at least, the concept pans out as expected: Although the mobile site isn’’t actively being promoted yet, Sharemo it already racks up 400,000 page views monthly.

Sharemo is operated by Enigmo, a company setting itself apart from other Japanese web companies by an international mindset. Their promotion networks rollmio and pressblog are successful outside Japan already, and Sharemo is set to follow suit in the mobile space. Will this concept work outside of Japan? 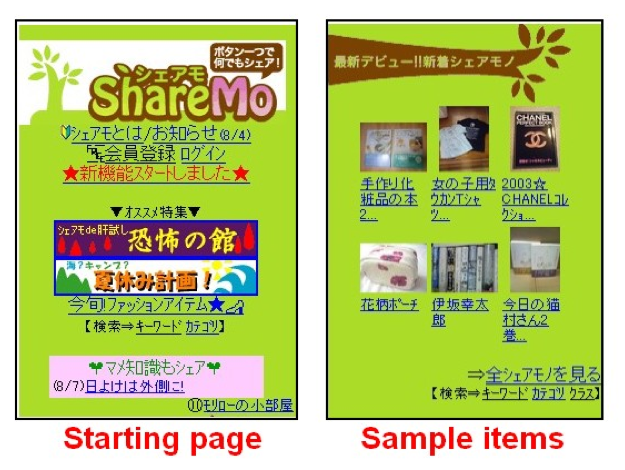