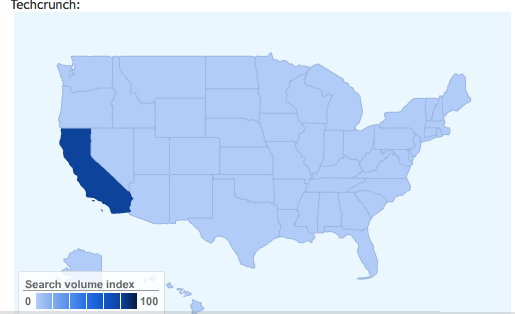 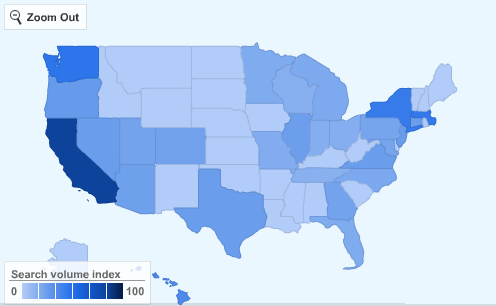 Which map above is a better representation of regional interest in TechCrunch?

Before you answer that, first some background. Some blogs are putting up posts today based on maps and data generated by Google Insights for Search, a service that was launched a week ago. Just like with Google Trends, you can put in any keyword and Google Insights gives you a deep dive into search activity around that term around the world. For instance, Pingdom used it to generate global popularity maps for different social networks based on how often people search for them in different regions. And Andrew Chen created U.S. popularity maps for Digg, Facebook, MySpace, Netvibes, Skype, Techcrunch, Twitter, and YouTube. You can see Chen’s maps in a post he wrote titled, “Early adopters vs the Mainstream: Google Insights points out websites only used by Silicon Valley nerds.”

Now back to the maps above. Some of the sites Chen created maps for show a very limited appeal. For instance, Twitter only registers in a handful of large states, and the only people searching for Netvibes or TechCrunch seem to be in California. Or at least, that’s what you’d think by looking at his maps. The TechCrunch data made me do a double take. I know that we are not a mainstream site (and we don’t try to be). But I also know that we have a lot of readers all over the world.

So I went to Google Insights and generated my own maps, which looked quite different. The first map above is Chen’s TechCrunch map. But the second one is the map I came up with when I searched for “techcrunch” on Google Insights.

It shows that California is indeed our strongest market, but it’s not the only market. People in Washington, Massachussets, New York, Texas, and other markets are also searching for us. That seemed more reasonable. 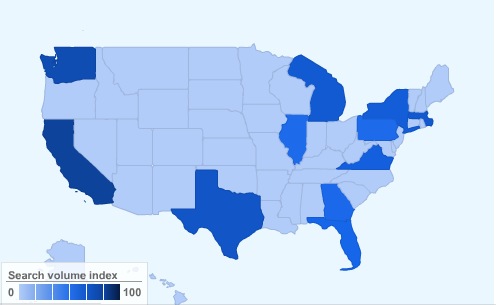 But here’s what comes up when you search for “Twitter” on Google Insights: 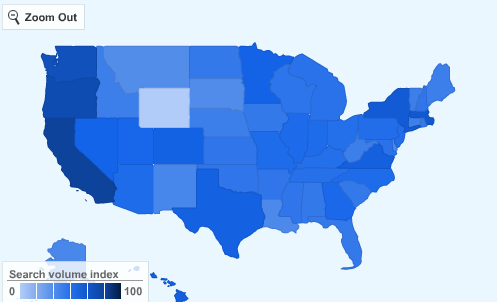 Based on this data, there actually seems to be pretty broad-based interest in Twitter across the U.S.—with the possible exception of Wyoming. So what gives? It turns out that Chen included the “.com” at the end of each site’s name when he created his maps (“beta.techcrunch.com,” “twitter.com,” etc.). I can see why he might have done that— to filter out any searches that were not for the sites themselves. But I think that method also cuts out a lot of relevant searches as well. Only nerds add the “.com” in the search box when they are looking for a site.

The point of all of this is that insights only come out from actually playing with data. I’m glad Chen put up his post (and I like his blog, in general) because it forced me to do my own digging. And it confirmed for me that interest in TechCrunch is actually global (we are real popular in India, it seems). And more to the point, as you would expect, it is centered around large metropolitan centers. And that makes sense, because a TechCrunch reader in San Francisco probably has more in common with a TechCrunch reader in Delhi or Paris than with someone in Laramie, Wyoming. 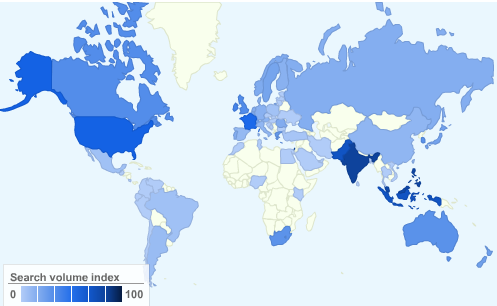 Update: Here are some maps of the geographical distribution of TechCrunch readers based on actual traffic over the past 30 days (from our internal Google Analytics). For this example, the search trends captured by Google Insights point in the right direction, but they don’t show the whole picture in as much detail as the real data.