Steve Jobs shared some stats on how the iPhone App store is doing one month after launch with the WSJ’s Nick Wingfield. There have already been 60 million downloads, the majority of them free. But paid downloads are doing just fine, pulling in $30 million in revenues in the first 30 days. The article does not reveal the total number of paid downloads, but given that apps range in price (mostly gravitating either to 99 cents or $9.99, but one briefly going as high as $999, before it was pulled down), it is safe to say that fewer than 30 million paid apps have been sold. One game alone, Sega’s $9.99 Super Monkey Ball, sold 300,000 copies (or $3 million worth). That one game alone accounted for 10 percent of all iPhone app sales.

Here are some stats culled from the WSJ article:

At the current rate, the App Store is on track to bring in annual sales of $360 million. Apple keeps about 30 percent to cover its costs (as it does with iTunes song sales), and the rest go to the developers who create the apps.

The question is how many apps can one person really manage before becoming overwhelmed. While the initial impulse is to download as many apps as possible to try them out, there is a limit to how many apps you can juggle on your iPhone. It is not much different than a PC. You have tons of apps, but how many do you actually use on a regular basis? For most people, that number is probably no more than ten apps, and on a daily basis, maybe 3 or 4 tops. Update: With an estimated three million 3G iPhones sold so far, and another six million first-gen iPhones, that averages just over six apps per phone (and that’s not even counting the iPod Touch).

For instance, of the 30 apps on my iPhone, I’ve used only about six more than once, and nearly all of those come with the device. By far, the app I use the most is Gmail, followed by Web browsing. Those two built-in apps account for about 90 percent of my usage and are the only apps I use on a daily basis. Those are followed by the camera (if you can call that an app), the calculator, and Maps. Of all the apps I’ve downloaded from the App store, only two of them are seeing regular usage, and both are games: Tap Tap Revenge and BeeCells (which my four-year-old plays more than I do—in fact, he think that’s what the iPhone is for).

And I’m not the only one who thinks that these apps are going to hit a saturation point real soon. And then it will become clear that the killer apps on the iPhone are the same as on your computer: email and the browser. 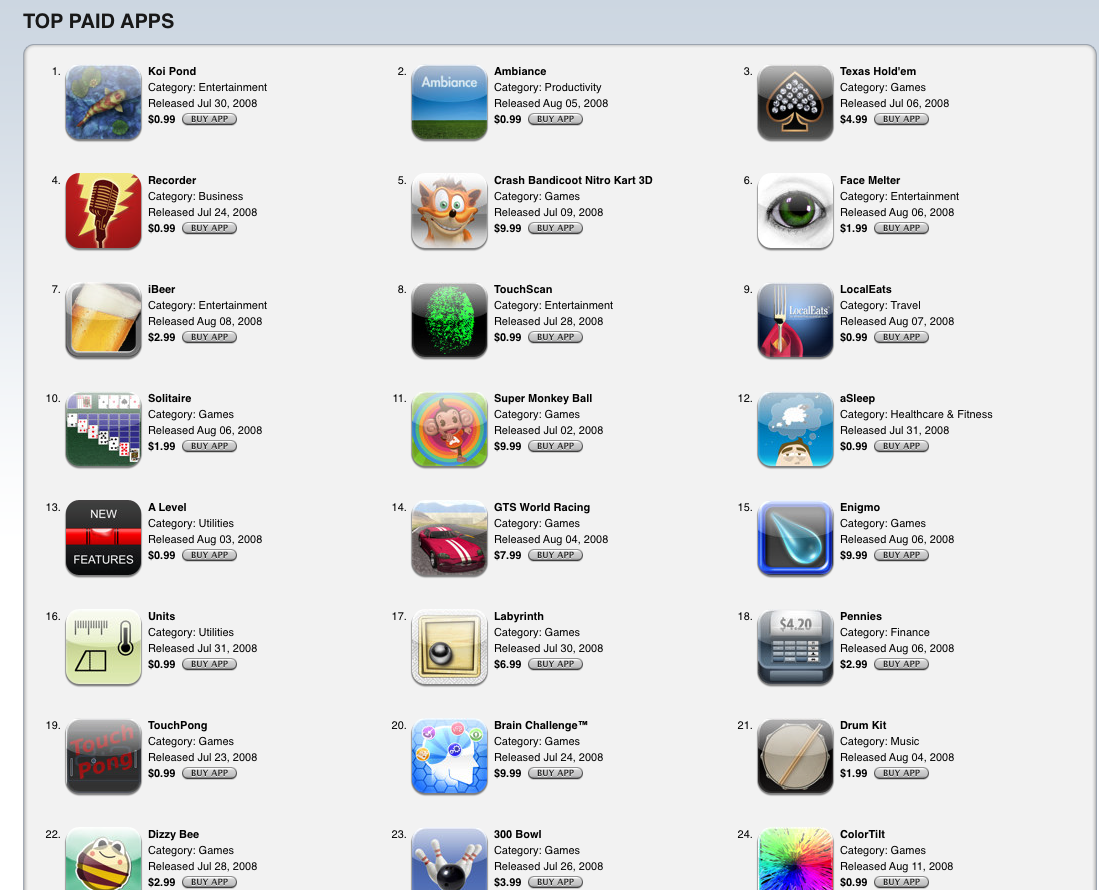