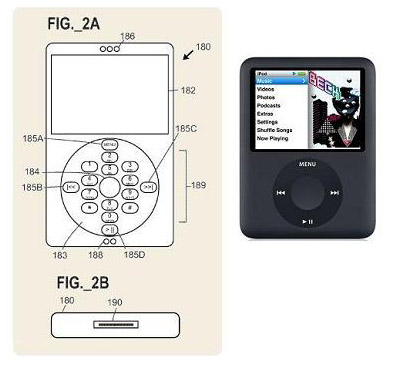 With all the talk of an iPhone nano swirling in the blogosphere, some guy named Neo at MacNN thinks he has the answer. We begin with what I wager is the worst line ever written on a Macintosh blog:

The reasoning behind this viewpoint has it merits and I’m not about to dispute that position being that they also held the view that such an Apple phone may arrive next spring.

Whew. That was tasty. The story is this: So DLO seems to be manufacturing some sort of phone or dock or something shown here in this patent application. Now, I don’t know much about patents but as far as I can tell DLO wouldn’t patent something that Apple is planning on making so I can’t follow why this points to an iPhone nano. The author goes on to say that this weird-ass combination is a “wink wink nudge nudge” to DLO by Apple which means DLO is in a position of power and that Apple cares what they do. I agree that DLO makes nice gear, but the definitely don’t get nudged by Apple.

What this does point to, however, is some wild prognostication on the part of MacNN and a failure in our school systems.