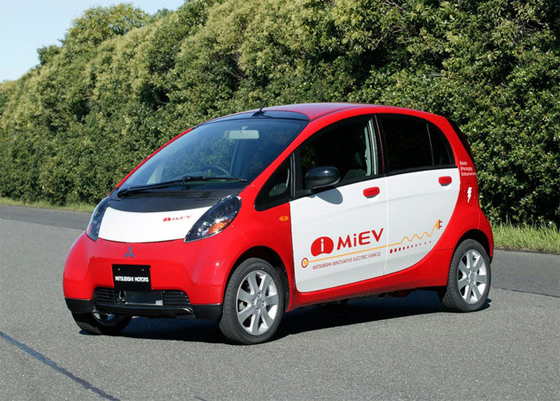 Mitsubishi’s i MiEV has been bouncing around for a while, trying to gain traction for electric cars. The little buggy has been fleet-tested in Japan, and more recently has been announced in Australia. Recently, 10 of the plug-in cars were used to ferry media and officials about at the G8 Hokkaido Toyako Summit.

Now, the i MiEV is coming to America. Under a three-year program, two utilities will add several of the cars to their fleet. Pacific Gas & Electric and Southern California Edison will test the cars starting in October, following a similar program in Japan.

The i MiEV is compatible with standard 110-volt electrical outlets and charges in 10-16 hours (with shorter charging time for 220 volt outlets). Once charged, the 4-seater goes from 0 to 60 mph in less than 9 seconds. It uses a 330-volt lithium-ion battery and the 47 kW electric motor produces 63 horsepower and 133 pound-feet of torque.

The electric vehicle can achieve highway legal speeds, but only has about a 75-mile range. With the long charging time and limited range, consumer interest is sure to be limited. Used as fleet vehicles, perhaps the utilities will find them beneficial.

Competition will be a factor regardless. BG Automotive recently announced their electric car. While the range is comparable, top speed and price vary greatly. The BG car currently is marketing a “neighborhood vehicle” with a top speed of 25 mph, but it is only $16,000. Compare that to the i MiEV that will go on sale in Japan next year for about $25,000.

Since both cars have such limited ranges, it’s hard to imagine them being used for much more than a trip to the store. Next year however, BG plans on releasing a “highway legal” car. If they manage to accomplish their goal of producing fast, affordable electric vehicles Mitsubishi might have their work cut out for them. Direct competition does tend to breed success. Hopefully, we’ll be seeing not only lower prices, but an increased range in the models to come.