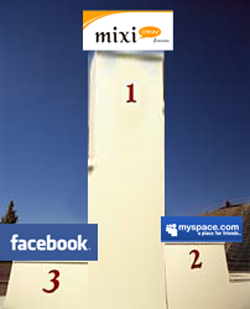 According to data released today by comScore, both Facebook and MySpace still trail Japan’s leading social network Mixi.jp by a wide margin, despite recent pushes by both networks to expand in the country. While Facebook’s Japan site has grown three fold in the last year, it still has only about 4% of the users that Mixi does (538,000 versus 12.7 million unique visitors in June).

The data confirm TechCrunch contributor Serkan Toto’s post last week that described why the two networks are largely failing in Japan. Toto explains that much of the problem stems from Facebook and MySpace’s late entry into Japan – it took both of them years to release localized versions, giving Mixi time to establish a stranglehold on the market.

According to Toto, another contributing factor has been a lack of changes made by MySpace and Facebook in response to Japan’s cultural differences (although both Facebook and MySpace argued that we missed key emerging partnerships and products they are developing). In Japan, many users are more concerned with security, privacy, and to some extent, anonymity – things that Mixi has placed more emphasis on than Facebook or MySpace.