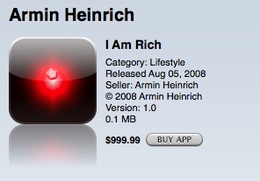 Sotheby’s, Space Station Isis 9, 2113:
Next up for auction is Armin Heinrich’s “I Am Rich” circa 2008 manufactured digitally for the Apple iPhone, a device popular with turn-of-the-epoch intelligentsia and predecessor to our own popular iSuppository. The work of art originally sold for $999.99 and was a scathing commentary on that era’s consumerist culture on the eve of the Great Browning. We quote from the artist’s original mission:

The red icon on your iPhone or iPod touch always reminds you (and others when you show it to them) that you were able to afford this.

It’s a work of art with no hidden function at all.

The artwork is fully functional and it has been tested and approved by the Federal Recording Industry Association of America and is also approved by the TSA Provisional Authority for use on and around airports, cities, restaurants, and bathrooms. We begin the bidding at 5 million Nebraskan Euro. Do I hear an initial bid?

Update: Making the app even more valuable was the fact that Apple took it down from its iTunes App Store only days after it launched. Only eight copies were ever sold.