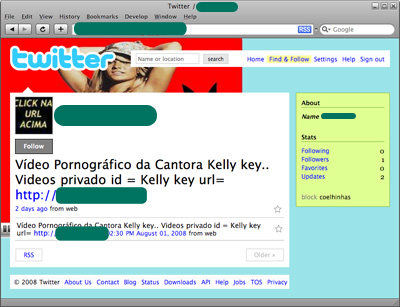 Twitter spam just took a new twist. In addition to all the regular marketing spam on Twitter (which the service is has tried to combat with its own blacklist), now there is something even more malicious: a computer attack disguised as spam.

Computer security company Kaspersky Lab has found a Twitter profile that ostensibly looks like it is promoting pornographic downloads. But when you download the “Adobe Flash” player necessary to watch the video, it installs a Trojan Horse piece of software that can take over your computer. Kaspersky suspects Brazilian hackers. The name of the profile means “pretty rabbit” in Portuguese.