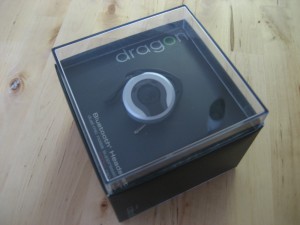 Revamping their bluetooth headset of 2007, CallPod is just about ready to ship the Dragon V2. Coming in at just 5 cents short of $100 bucks, they’ve managed to pack a bunch of features into a box $20-$30 bucks cheaper than other high-end headsets: 100 meter range, dual-mic noise suppression, 8 hour talk time, “Dragon to Dragon” (Walkie-talkie-esque) communication, upgradeable firmware, and the ability to pair and auto-switch across multiple devices.

Mr. DHL just stopped by with a couple of headsets in tow. They’ve barely just hit the chargers, so it’ll be a day or two before we have a full review up, but I figured we could take a peek inside the box. 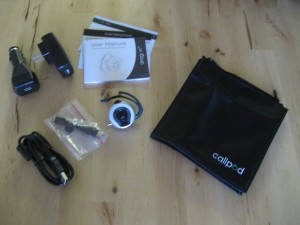 I was beyond stoked to see the variety of charging methods included in the box. While USB and wall chargers are somewhat standard, the included car adapter is an awesome touch. I never remember to charge Bluetooth headsets. Ever. Combine that with California’s newhands-free laws, and that car adapter is one of the best things they could (legally) include in the box.

Though I haven’t powered it up yet, I did slap the headset onto my ear real quick to gauge comfort. I was impressed – it slipped on comfortably right out of the box. Hell, I’d say it’s one of the two most comfortable headsets I’ve used, the other being Aliph’s new Jawbone. On the downside, the Dragon V2 does feel like it wiggles around a bit during movement, though considerably less than just about every other headset I’ve owned. 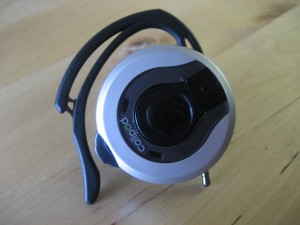 Being used to the longer lines of most Bluetooth headsets, I was a bit put off by the Dragon V2’s circular shape at first glance. Once it was on my ear, however, it made perfect sense: it looks like a wrap-around headphone, making you look slightly less like a tool than most headsets would.

All that said, it’s time to go put’em to the test. Full review should be up in a day or two.