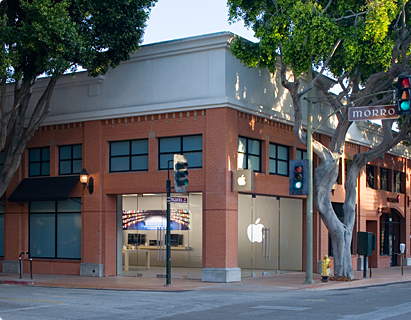 17 days after the iPhone 3G launch, could Apple still be pulling a crowd each day? A bit doubtful, I cruised over to the local Apple spot this morning. Sure enough, the line was about wrapped around the corner, 20+ iPhone-hopefuls deep.

In what’s being declared as an effort to make getting an iPhone 3G “easier and more convenient“, Apple has decided to open the doors to their retail stores at 8 a.m (2 hours earlier than usual) indefinitely. Additionally, they’ve added staff specifically trained in iPhone sales/activation who are able to “pre-qualify” customers while they wait in line. Once qualified, customers are given an iPhone voucher which can be traded anytime before the doors close.

While the new staff and pre-qualifying process oughtta speed things up, opening early seems more like an effort to get the morning mob out of the store (and out of the way) as early as possible.