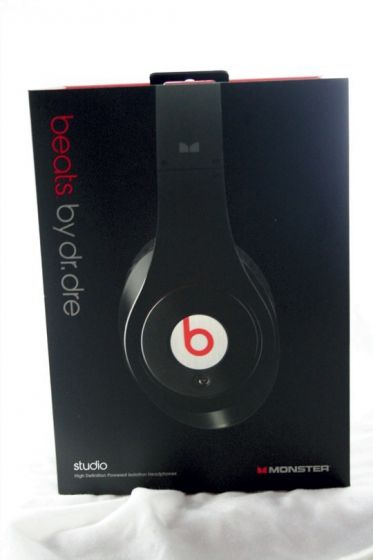 Writing anything about Monster is fraught with peril. Everyone knows the traditional lime: Monster preys on morons. They sell expensive cables to people who don’t need them and they made a mint doing this over and over again. But this is a new era. Wireless is soon going to eat Monster Cable’s lunch and unless they can diversify – and convince the jaded public that they’re not out to screw them – they are stuck.

So where does that leave the Beats by Dr. Dre? This is a relative first for the company and I believe the headphones, taken at face value and considered in a vacuum, perform quite admirably.

First off, I’m coming at these headphones from a non-audiophiles perspective. I don’t know the lingo and I don’t want to get into a penis-length war with audiophiles because some of what they say is batshit crazy.

The question I tried to answer with the Beats is this: would I recommend them to a friend who flies a lot. No matter what anyone says, the majority of us use earbuds or headphones on flights. I know there are better headphones out there and I’ve used some of them but I’ve always gone back to the Bose QuietComfort 3, one of the most popular headset brands for road warriors.

How do the Beats compare? I’d say quite favorably. As Head Fi points out I was expecting a pair of bass-heavy headphones without much fidelity. What I found in tests at home and six hours of use on a plane were a pair of comfortable headphones with nice fidelity and good noise cancellation. Monster talks up the connection to Dr. Dre and I’m that the good Doctor knows his audio.

Music sounds great on these headphones. TV and movies – I was on JetBlue watching DirectTV and watching movies on the iPod – were a bit rougher. The headphones seem to be tuned for music and not speech and soundtracks.

Were the unlistenable? No. Because they were quite comfortable and cancelled a lot of plane noise I was happy to sit back and ignore whatever artifacts were happening in amplifier. Incidentally, these headphones were louder than the QC3’s. Plugging the Beats into an audio source and then the QC3’s showed a distinct difference in the volume.

Another slight complaint: the headphones aren’t very portable. The QC3’s pack flat but the Beats fold over, leaving a fairly large package. The cabling is also very nice and tangle-free – it comes with a standard audio cable, a 3/4″ converter, and an iPhone adapter.

As a whole these headphones are more than acceptable and quite nice. I’m not sure about the $349 price tag – as many have pointed out there are cheaper headphones out there – but for my money I’m sold on Bose QC3s and I’d be happy to swap the Beats out for extended music listening sessions. Monster is trying and, all things being equal, I’ll give them a chance. Just don’t buy the special anti-oxygen copper and gold coated super magneto-audio dongle that they sell alongside the phones – it’s just not worth it. I think it’s just a piece of plastic.

For more info on Beats By Dre Headphones go to www.beatsbydre.com