Piczo, a social network with a strong teenage following, has launched a new developer platform that allows users to quickly generate content from partner sites while helping brands increase their exposure on the network. Piczo has never reached near the popularity of mega-networks like MySpace and Facebook, but it continues to draw a sizable audience, primarily from the teenage demographic. In conjunction with the platform, the site is also launching “Piczo Powered Pages”, which effectively integrate the social network’s features into other sites. Users can try one out at eSPIN, a social network owned by Hearst Magazines that has already made use of Piczo’s featureset.

Included in the API are three new features: “Post to Piczo”, “Create a Page”, and “Piczo Toolbar”. The “Post to Piczo” function allows users to post items to their Piczo accounts from external partner sites, which include Meebo, Widgetbox, and Clearspring. “Create a Page” allows users to use pre-designed templates to generate new Piczo pages containing partner content. Finally, developers will now be able to partner with Piczo to become part of the page editor’s toolbar, which the site says allows them to become an “integral part of the Piczo product.”

Unfortunately, this new platform doesn’t share much in common with the dev platforms seen on Facebook and MySpace. Instead, it’s more like a handicapped API that doesn’t have much flexibility. The site may well expand this functionality over time, but for now, don’t expect to see a developer community spring up around Piczo.

That said, the new features should help make Piczo more competitive with the larger, more popular social networks like Hi5, Facebook, and MySpace. ComScore data shows the site slipping off over the last year, dropping from 12.9 million users in April 2007 to 8.4 million globally in June 2008. However, the site has seen impressive growth in the United States, growing from 655 thousand to 1.4 million in the same time span. 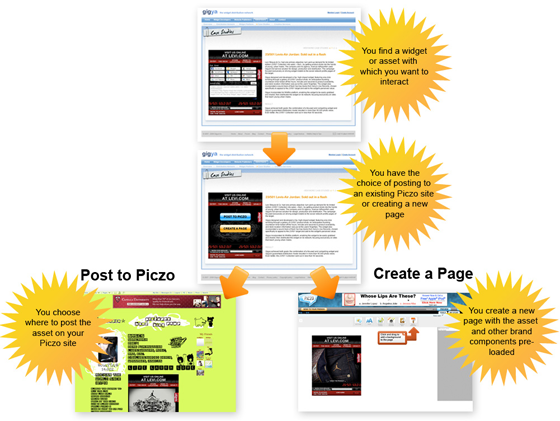