Getting average know-nothings to create content for your site is easy enough and well understood by now. But how do you get experts to create in-depth topic pages about the hot-button issues of the day, complete with videos, links, and healthy commenting? Russell Fine is trying to do that with Opposing Views, a site that launched a few hours ago. It pits experts against each other on topics such as the economy, global warming, health issues, and politics. “We are trying to create a site where people can get well-informed on a topic quickly,” says Fine.

Opposing Views is an information portal disguised as a debate site. Experts debate hot-button issues, and readers can comment and vote on who they think is right. For instance, the site has a Barack Obama adviser and a John McCain adviser debating about “Who Has the Right Plan For America’s Economy?” A NASA scientist and a Hudson Institute fellow debate, “Have We Reached Peak Oil?” The National Autism Association and a doctor go head-to-head on: “Are Autism and Vaccines Linked?”

Opposing views finds experts and associations willing to argue one side or the other, and sometimes multiple experts weigh in on a single topic. Each argument is broken down into a list of simple points with a headline that readers can click on to go deeper. The experts can argue each point, and embed supporting videos and links. Readers can add their own arguments in comments and vote on who they think is winning the debate. (The best comments can be elevated to the starting page of each debate by the experts).

In the end, fine hopes to create an information-rich site that ranks highly on Google for each topic. In that sense he is competing with About.com, Helium, and even Wikipedia and Google’s newly-launched Knol. The debate format ensures that the content will change constantly, and the participating experts and associations will lend their (link) authority to the site.

The company was founded in September, 2007 and has raised $1.5 million in angel funding from Applied Semantics co-founder Gil Ebaz, Frontera Capital, and Fine (who is also the chairman of sports forecasting company Accuscore and was previously the founder of Youbet.com). 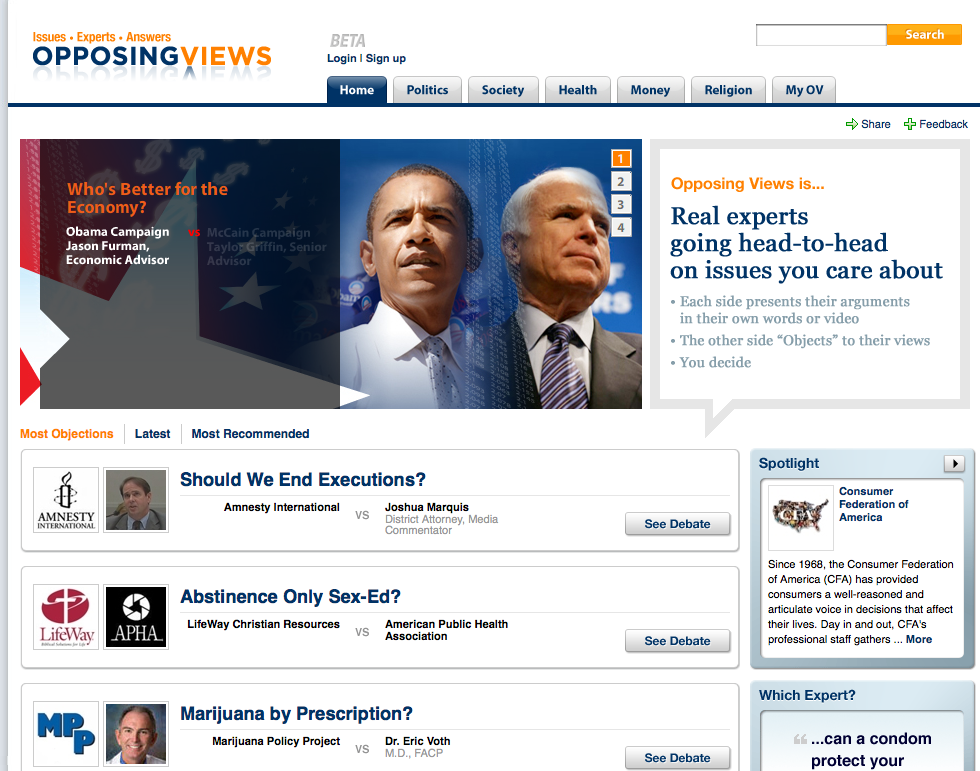