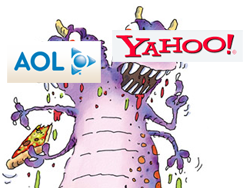 It’s like the beast that won’t go away. As long as Yahoo is in play and Microsoft keeps flubbing negotiations to buy it (or stringing Yahoo along, depending on how you look at it), AOL keeps raising its hand and saying, “What about me? What about me?” Time Warner would be happy to unload AOL to any taker—Yahoo, Microsoft, it doesn’t care. Talks may be heating up before Yahoo’s August 1 shareholder meeting, according to an unnamed source who got the story planted in Reuters, or Time Warner’s M&A team might have nothing better to do during the summer doldrums.

Time Warner has been talking to Yahoo since Microsoft first made its bid, with negotiations intensifying every now and then. The most recent round of talks started to heat up two weeks ago when it looked like a combination with AOL might be Yahoo’s only remaining option. The rationale would be cost-savings and not much else. (Citi analyst Mark Mahaney figures the combined entity could save $900 million a year and gain greater scale in display advertising).

And, as I noted back in March:

Time Warner desperately wants to salvage AOL, but merging it with Yahoo does not necessarily keep it relevant. Given its disastrous history with AOL, Wall Street may punish Time Warner if it tries to pull another Jerry Levin

That is still true. Getting rid of AOL could help its sagging stock. (Disclosure: As a former employee, I own Time Warner shares). Although, it’s not clear that Yahoo really needs the additional headache of going through a massive merger with second-banana AOL when it has more pressing issues to worry about (namely, Microsoft and frenemy Google breathing down its neck). A sale of AOL to Microsoft might make more sense, since Microsoft needs to bulk up its presence in online advertising. Buying AOL, though, doesn’t help it with search, which is the single asset Microsoft is most interested in acquiring from Yahoo.

Any renewed interest from one potential suitor, of course, would cause AOL/Time Warner to try to get a bid from the other, and that may be all that is happening here: AOL is trying to talk its price up.