Facebook and MySpace, the two largest social networks, eagerly launched new iPhone applications last Friday. Both quickly shot up the top apps list. Apple has since turned off the download count feature, but Facebook is no. 7 on the free list, MySpace is no. 11. But while both applications are useful for heavy users, they won’t drive new users to the services because they failed to leverage the killer iPhone feature – location awareness.

The applications are pretty good mobile versions of the standard experience. MySpace, which we reviewed last week, provides users with most key features of the service, and they’ve added some nice touches like the ability to upload photos from the iPhone camera. You can download the application here (and add me as a friend).

Facebook’s iPhone app is clearly better. They had a bit of a head start with their web app last year that was at the time the finest example of an iPhone-specific website. The new iPhone app was created by the same guy – Joe Hewitt – and includes deeper integration with the phone. Tap on a friend’s name and call them. Or use the included Facebook chat application and skip those text messages. One big problem with Facebook on the iPhone – it takes forever to load and the application crawls, just like the web version.

But both MySpace and Facebook miss the real opportunity to drive usage growth on the iPhone – location awareness. The reason? Privacy concerns. The lost opportunity? Huge potential user growth and connections.

I’ve written about this opportunity repeatedly in the last year. In February I speculated on the demand for an iPhone-only social network to drive real world social interactions: “I think an iPhone-only social network…would be a huge hit…if it had presence awareness and was able to tell you both where your friends are and what they are up to. And also let you meet new people around you who were open to it.”

In April I saw a demo of the new product Loopt was building for the iPhone. It had all the features I suggested, and more.

Users of these new social networks can choose to notify other users when they are physically close to them, and show a picture, first or full name, and basic profile information. If you’re both in the same bar or at the same conference, you can browse and filter other users to find a date or do a business deal.

And you know how awkward it is when you run into someone that you sort of know but have forgotten their name or what they do? Your phone can see them coming and alert you. That means you can have richer conversations with people you are acquainted with but don’t know very well.

These new social networks can help you meet new people, remember details of the people you already know, and find your friends when they’re nearby.

MySpace and Facebook are sitting on the sidelines while these new networks try to get a foothold. And it’s all because of privacy concerns and fear of litigation. 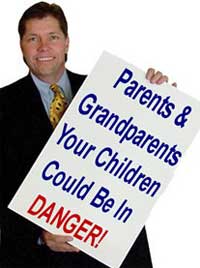 The media loves nothing more than to talk about sexual predators lurking around the big social networks. Both MySpace and Facebook have had to make big changes to their privacy policies, particularly how they set up accounts for minors. So when the product guys say “hey, let’s add a feature so that any MySpace user can see the basic profiles of any other MySpace users near them,” the lawyers freak out.

Certainly privacy rights need to be considered, and Loopt has already had some problems with unintended invites going out (although this hasn’t happened to me and I’ve been using it since launch). But they can be addressed by allowing users to opt out of showing others their location, or only showing it to certain types of people (by age range, sex, friends of friends, etc.). And minors can be permanently segmented from older age groups as well.

To be fair, both MySpace and Facebook have said they will eventually roll out location based services to help users meet each other. It’s unlikely any of the early networks will get an insurmountable lead on the new platform anytime soon, so they can take their time with their lawyers to make them comfortable. But if they wait too long, or release overly-restrictive products, that may change.

We’ll have more to say on this shortly – our goal is to have iPhone users at our meetups and conferences be able to network with each other, swap contact information, and meet new people. Hopefully by our big August Capital party on July 25, TechCrunch readers will be using their iPhones for a little social networking.