DanceJam, a dance-focused social network that launched in March, has announced several major partnerships and features today. (Disclosure: Michael Arrington is an investor). 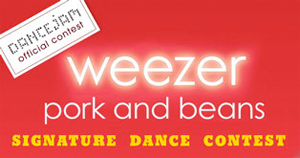 The first partnership, with Weezer, is being promoted by Judson Laipply, the guy we’ve all seen dancing in that Evolution of Dance video. Dancers can submit videos that show unique and easy to learn dance routines on DanceJam to be considered for the contest. One winner will win a pair of tickets to the Weezer show of their choice, and $500 cash.

DanceJam has also partnered with Janet Jackson to host online auditions for her upcoming reality show. Janet Jackson and choreographer Gil Duldulao will be looking for singers and dancers to submit their audition videos on the site.

The site also has a new tournament feature, where users can enter and vote on tournament brackets for things like “Best Choreography.” Several more features are in the works, like the ability to search for cities, groups, and events.

DanceJam was founded by M.C. Hammer and Flock’s Geoffrey Arone and Anthony Young. They have raised to date $4.5 million through two rounds from Softbank Capital, Rustic Canyon Partners, and several angel investors.